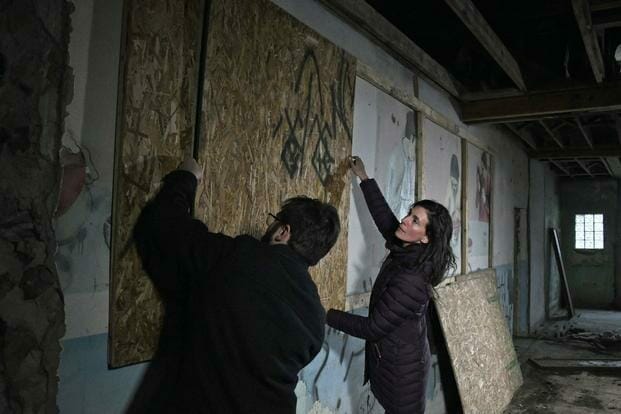 A dilapidated building at the former Fort Ritchie in Cascade, Maryland, will be turned into an artisan village — and a historic Japanese Nisei mural within it — will be preserved thanks to a state grant.

The Building 305 project at Fort Ritchie, located in Washington County in Western Maryland, received a $225,000 grant this fall from the Maryland Department of Housing and Community Development’s Community Legacy program. The work to save the building and its mural was one of 64 projects awarded a combined $8 million.

“This grant allows a building with significant historical importance to be rehabilitated and preserved rather than continue to deteriorate,” said Landon Grove, Fort Ritchie’s historian.

During World War II, Fort Ritchie served a dual role as a prisoner-of-war camp and military intelligence center. Building 305 was used by Nisei soldiers — Nisei is a Japanese term that refers to children of Japanese immigrants or second-generation Japanese Americans — who served in the Military Intelligence Service as translators and interrogators.

The building’s Nisei mural, which depicts four people creating and painting ceramics, was uncovered after Fort Ritchie’s new owners bought the property in April 2021 for more than $1.8 million. Not much is known about the painting, including who painted it and why, but the owners are considering looking into its history.

“The only thing we know is where the Nisei did their operations. Realistically, that’s why this mural is in here,” Grove said. “Why it’s scenes of people creating pottery and not scenes of military intelligence is a big mystery. But there’s a lot of interesting things — mysteries associated with this site.”

The mural is covered in cracks — some of the paint has chipped, and vandals have left graffiti on the wall but not directly over the artwork. The building’s interior is shaky and crumbling, with leaves and trash strewn on the floor.

Someone boarded over the roughly 12-foot-by-4-foot mural with plywood to protect it from further exposure to the environment and vandalism, Grove said.

“It has been subjected to years and years of wear and tear. At some point, the Army busted a hole through part of it, and it’s hard to say how long the hole has been in this roof,” Grove said. “The fact that it’s still here in this condition is remarkable.”

The mural will remain boarded up until it and the building can be rehabilitated.

It’s plausible the mural was made in 1944 by a Nisei soldier, Grove said. Even as their families faced discrimination and were forced to live in camps during World War II, the Nisei soldiers were a small but important part of the “Ritchie Boys,” a collection of servicemen trained in intelligence at Camp Ritchie.

The group consisted of approximately 20,000 soldiers, about 2,000 of whom were Jewish refugees born in Germany and Austria. About 200 were women and 500 were Nisei, including some women.

An unknown veteran came to Fort Ritchie one day in 2021 and gave Grove a flash drive containing thousands of images taken around the fort in 2008, he said. The mural caught Grove’s eye.

“We tried looking for it,” he said.

But there are over 70 stone buildings on the property, and a lot of them haven’t been touched since Cascade resident John Krumpotich bought the property in 2021, Grove said.

Krumpotich has pledged to preserve Fort Ritchie’s history, while welcoming businesses, housing and community events to breathe life back into the quiet mountain town that borders Pennsylvania.

“It’s been extremely exciting. We built a great team, brought people back to the base and a bunch of businesses, as well. All and all, it has been very rewarding,” Krumpotich said. “The Japanese Nisei painting is just a historical monument that we need to try our best to preserve.”

It was his wife Joyce Johnson’s idea to turn Building 305 into an artisan village because of its placement and unique architecture. The staff found the mural early this summer when Grove noticed paint outlines that seemed to match the ones in the pictures while scooping out the building.

“Peeling that plywood back and finding exactly what you think you’re going to find is something historians dream about,” Grove said.

The Army closed Fort Ritchie in October 1998. State and local officials have struggled to find new uses for the property, which sprawls over 500 acres, with dozens of fieldstone buildings, plenty of trees and two lakes.

In 2006, the Army gave the property to PenMar Development Corp., a quasi-governmental entity, which sold it that same year to Corporate Office Properties Trust for $9 million.

COPT was responsible for the removal of many of the structures on the property that were built during and after World War II, Grove said. COPT then faced lawsuits and board disagreements on development plans.

PenMar took back the property in 2012 and, before dissolving in 2016, handed Fort Ritchie to the Washington County Board of County Commissioners. The property has since by and large sat vacant and vandalized, other than the presence of a community center.

However, development projects have been snowballing since Krumpotich took over, Grove said. Turning Building 305 into an artist collective and reviving the mural are among a host of projects happening at the former Army post.

Several projects there have received financial support or grants, including a $400,000 capital improvement grant to develop The Ritchie History Museum, located next to Building 305. Grove is the museum’s director and curator.

The property also received funding from the state Department of Housing and Community Development for infrastructure improvements that will help reactivate the nearly century-old National Guard buildings for mixed uses, Grove said. There are other grants pending in the pipeline, he said.

The property now has two manufacturers, an ice cream shop, a cafe and an event venue. Several more businesses should open in 2023, including a primary care facility, a taproom, a beauty salon and a spa, as well as the museum and the artisan village, Grove said.

“The mural, instead of being covered by plywood, will be on display for the public to see for the first time in many, many moons,” he said.

© Copyright 2022 The Baltimore Sun. All rights reserved. This material may not be published, broadcast, rewritten or redistributed.