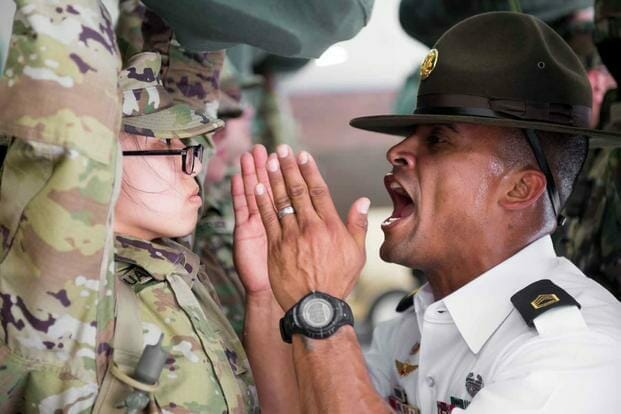 Army drill sergeants who model themselves on R. Lee Ermey’s ruthless Marine Corps drill instructor in “Full Metal Jacket” are on their way out the door.

Those noncommissioned officers have for generations been a new recruit’s first real introduction to the Army, and they have famously been known to scream, curse and physically punish trainees. But Army planners are hoping that instead of the stereotypical screaming drill sergeants in round brown hats, the new crop of NCOs will act more like strict football coaches.

“They’re not trying to make the walls sweat, they’re not throwing trash cans,” Command Sgt. Maj. Scott Beeson, the top enlisted leader at the Army’s Center for Initial Military Training, or CIMT, told Military.com in an interview during an Army conference in Washington, D.C. “All that stuff is slowly going away.”

The shift follows substantial changes in the Army’s physical training. While recruits may have to endure less screaming at boot camp, the new training has effectively made the fitness and marksmanship requirements for recruits more demanding.

The loud and brutal drill sergeant was seen as a way to toughen up fresh recruits and prepare them for the harsh realities of war, from the jungles of Vietnam to the post-9/11 battlefields in Afghanistan and Iraq. But that thinking is changing, and many in the service believe a less harsh approach may actually be more effective with recruits.

“The naysayers who we were initially fighting against didn’t believe this new way of doing things,” Beeson said. “Gentler isn’t the right way to say it; it’s just dignity and respect. People desire structure, and we’re trying to give it to them. We’re just not being assholes when we’re doing it.”

The idea is to build a bond of trust with new soldiers early on, which could result in them being more comfortable with bringing issues to their leaders. Tweaking how boot camp instructors do business could also help new privates better absorb the training, much of it dealing with safety issues ranging from proper handling of firearms to working out.

And the revamp is driven partly by the Army’s need to appeal to Gen Z, who are now reaching enlistment age.

“This generation is very intuitive,” Maj. Gen. John Kline, commander of CIMT, said in an interview with Military.com. “I think that they can see whether somebody is authentic or not. So if [drill sergeants] are putting on some sort of facade, they’ll see right through it.”

During the purposefully chaotic reception of new trainees, drill sergeants would swarm them, scream and inflict physical pain by ordering them to perform rigorous tasks such as holding heavy bags over their heads for hours. The goal was to immediately set the power dynamic and cause as much stress as possible.

Staff Sgt. Krista Osborne, a drill sergeant at Fort Leonard Wood, Missouri, was named the Army’s 2022 drill sergeant of the year. Osborne said she was initially too aggressive with new recruits and quickly found they were turned off by the approach.

“The aggression, screaming, yelling, the excessive physical punishments … they’re not receptive to that at all,” Osborne told Military.com.

Many drill sergeants try the brutal approach because it mirrors the drill sergeant they had, she said. It was just the way boot camp was done.

“I was a lot harsher my first couple of cycles because that’s all I knew, and I finally realized that wasn’t working. These trainees are not listening to me. They’re not getting better,” Osborne said. “If they’re not doing what I want them to do, that’s when I had to tone it down.”

The Army has also totally revamped its major pillars for training in recent years, including physical fitness and marksmanship, both of which are now broadly seen as much more difficult.

The Army Combat Fitness Test, or ACFT, is a more complicated test than its predecessor, which only measured push-ups, sit-ups and a two-mile timed run. Now, soldiers must carry kettlebells, deadlift heavy weights and drag a 90-lb. sled. The requirements can be hard for anyone who has never worked out before, which is the case for many recruits.

In previous years, basic trainees would mostly focus on running and bodyweight workouts. But with heavy weights being the new status quo for the Army’s fitness standards, physical training for new soldiers is just as much about teaching them how to work out as the training itself.

“We do a lot of circuit training; some can’t even deadlift the bar,” Osborne said. “With squatting, sometimes just showing them how to squat [is important] because a lot of them don’t even really understand how to squat properly.”

With the Army’s new rifle marksmanship test, soldiers have to change positions and reload while targets are still popping up. It’s a significantly faster-paced event than the old rifle qualification in which soldiers would stay stationary and change positions only during different phases of the test.

The Army’s new marksmanship demands can be daunting for incoming soldiers, who may be shooting a gun for the first time in basic training.

“We had to spend time really emphasizing mag changes and positioning changes and, you know, reloads and malfunctions. There’s a lot more malfunctions now with the new qualification than there was with legacy,” Osborne said. “So, we had to really just make more time for training, and it was a challenge at first to fit that into the schedules.”

As for what’s next, leaders, including Army Chief of Staff Gen. James McConville, have signaled the service is going to increasingly rely on the Future Soldier Preparatory Course at Fort Jackson, South Carolina.

The pre-basic training was introduced in August as a 90-day program for new recruits who are just outside of the Army’s standards for body fat or came up short on the Armed Services Vocational Aptitude Battery, or ASVAB. Soldiers can attend a fitness course teaching proper nutrition and exercise, and an ASVAB course on studying techniques and the high school-level academics the test requires.

If new soldiers can meet the Army’s academic or weight standards after those 90 days, or before, they can ship off to basic training. If not, they’re removed from the service.

So far, 581 out of 706 students in the ASVAB course — who otherwise likely would have not been allowed to enlist — progressed into basic training. For the fitness track, 292 out of 366 soldiers have qualified, according to internal Army data reviewed by Military.com.

“The early results of that look pretty promising and, depending on how that plays out in the next month or two, I think we will look at expanding that to some additional training sites,” McConville said during a press conference Oct. 10.

Related: The Army’s New Fitness Test Is Here. For Real This Time. No, Seriously. But Its Future Is Uncertain.