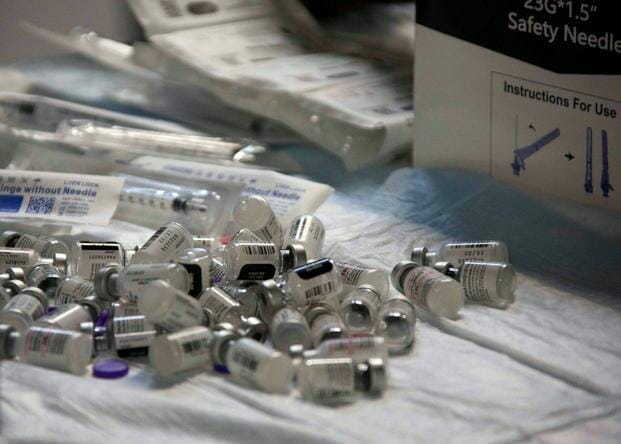 Since the military services hit their deadlines for troops to be inoculated against COVID-19, they have become increasingly entangled in legal woes and face a large roster of outright refusals — mostly from the Army National Guard — as courts block action.

The resulting uncertainty surrounding whether thousands of service members are about to be booted from the military comes as the branches struggle with what some are calling the hardest recruiting environment in a generation. Leaders have been busy lowering expectations for how many Americans will fill the ranks in the near future.

And many service members who have declined to get vaccinated, particularly in the Department of the Navy and Department of the Air Force, are being protected under pending lawsuits for religious exemptions. In response, those services are trying to offer alternative vaccines such as Novavax, which throws cold water on one of the main arguments given by deniers seeking religious exemptions.

Guard soldiers were ordered to be vaccinated by July 1, far later than most other services. Yet roughly 40,000 of them blew off the Pentagon’s directive. Troops in all branches have been required to be immunized against at least a dozen ailments including the flu and hepatitis for years, with the coronavirus vaccine a rare instance where vaccination has become a political hot potato.

But unlike active-duty formations, there is no policy requiring Guardsmen who refuse vaccination to be separated from service, meaning that the passed deadline has left states uncertain about what steps to take next.

“There is no definitive guidance; no one in the Army has told us how to [separate soldiers],” a senior Guard officer told Military.com on the condition of anonymity to avoid retaliation. “They don’t want to kick that many people out. There’s a lot of shenaniganry; there is no easy solution. These are leadership challenges.”

The Army’s vague policies have created uncertainty, with a regular string of service leaders raising concerns with Sergeant Major of the Army Michael Grinston about what to do with thousands of soldiers refusing immunization amid a rattled recruiting market.

COVID-19 vaccines almost immediately became a political dividing line for lawmakers and pundits, with some GOP governors balking at the Defense Department’s rules and arguing that Guardsmen fall under state leadership and should be shielded from orders from the Pentagon to get the shot.

The staggering number of unvaccinated Guardsmen sets up an unprecedented situation in which the Pentagon has drawn a line in the sand, but Army officials and Guard leaders interviewed by Military.com all agreed that so many troops being forced out would undermine the force.

Some are concerned whether unvaccinated troops pose any significant health risk worth a radical reduction in the size of the force. Many troops were vaccinated in January 2021, when the vaccine became available, but the small percentage of holdouts after the deadlines remains stubbornly steady.

“This is the problem we foresaw from the beginning,” the senior Guard official added. “It’s a very challenging recruiting environment.”

While many Guardsmen have outright refused to get vaccinated, some service members have put off getting inoculated while protected by pending lawsuits.

A lawsuit filed by 35 members of the Navy’s special forces community in Texas in January made its way to the Supreme Court in late March.

Around the same time, a federal judge in Florida ruled in a similar suit that the Navy could not do anything to remove a commander of a destroyer, despite testimony that he flouted the service’s rules for COVID-19 mitigation while seeking a religious exemption from the vaccine mandate.

The high court ruled that, while the Navy could not summarily discharge sailors who were appealing their religious exemption denials, it could reassign them. Days later, the judge in Texas made that case into a class-action lawsuit, prompting the halt of any discharges of sailors with filed religious exemptions. The destroyer commander, however, was reassigned.

Since those court rulings, discharges of sailors and Marines have continued slowly. At the end of March, the Navy had discharged just over 650 active-duty and Reserve sailors over the vaccine mandate. The total had reached 1,466 sailors by early August. In June, the court in Texas noted that the Navy could still separate sailors who withdraw their exemption requests, voluntarily separate, or choose to retire after several sailors filed motions with the court noting their desire to simply move on with their lives instead of waiting for a legal resolution.

The Marine Corps had discharged 3,069 Marines with the vaccine refusal discharge code as of the start of July.

The Air Force, like the Navy, is in a similar legal holding pattern.

A federal district court judge in Ohio certified a case out of Wright-Patterson Air Force Base as a class-wide complaint on July 27 that protected more than 9,000 active-duty, Active Reserve, Reserve and National Guard members of the Air Force and Space Force. That also included cadets, appointees and inductees who had asked for a religious exemption.

The service members, represented by the New York-based Siri & Glimstad law firm, were all “found by a Chaplain in the Air Force to hold sincere religious belief substantially burdened by the order to be vaccinated,” according to a press release.

As of July 11, the most recent data reported, the Department of the Air Force has denied 6,803 religious exemption requests and more than 3,600 appeals.

As of the most recent vaccination data for the Department of the Air Force, 97% of the total force — active-duty, Reserve and Air National Guard — had been inoculated against COVID-19.

Since July 11, the Department of the Air Force has administratively separated 834 service members, and nearly 140 airmen and Guardians have received religious exemptions.

The Air Force and Space Force are following the judge’s July 27 ruling, according to a Department of the Air Force spokesperson.

Refusers often state that the use of fetal cell lines in the creation of the vaccine is a point of contention for those with strict religious stances against abortion.

The Pfizer and Moderna COVID-19 vaccines do not need fetal cell lines for development or production but were tested on fetal cell lines replicated from an aborted fetus in the 1970s to ensure their efficacy. Only the Johnson & Johnson vaccine is made using fetal cell lines.

In an attempt to convince some with those religious objections, last month, the Air Force announced that Novavax — a COVID-19 vaccine developed without the use of human fetal-derived cell lines or tissue — would be an option in the near future for airmen and Guardians.

The Navy, in an email to Military.com, said that it also has Novavax doses available for sailors.

The guidance is clear for active-duty troops: Get the vaccine or be separated from the force, even if courts are making that latter consequence less clear-cut. But for part-timers, there is no such clear course of action, creating a confusing situation for commanders. Right now, Guardsmen are simply told they cannot participate in their typical weekend duties, which are funded by the federal government.

They also cannot attend most military schools or deploy on federal orders. Nonetheless, Guard planners have not issued any guidance on outright separating any members.

Unvaccinated soldiers can still participate in state duty. Those orders are typically reserved for short-term emergencies such as snow removal. The pay for Guardsmen is often less on state orders than federal orders, and state duty lacks any benefits or health care, in most cases. Larger crises often get a presidential emergency declaration, which then makes those activations federal missions — from which unvaccinated Guardsmen are now barred.

While soldiers won’t be paid and will have some of their benefits in limbo, they will still be taking up space on a unit’s books, making it more difficult for soldiers under them to be promoted.

The Pentagon relied heavily on the National Guard during the post-9/11 wars, making up a significant chunk of combat power in Afghanistan and Iraq. Guard troops continue to be deployed around the world, with some 20,000 troops overseas at any given time in Europe, Africa and other strategic locations.

Since the pandemic, the Guard has taken up a major workload juggling domestic missions, and governors are increasingly relying on their formations to tackle natural disasters, which are expected to become more frequent and severe due to climate change. Guardsmen are even tackling missions not traditionally associated with the military, including filling in during teacher and bus driver shortages for public schools.

“Readiness will be felt domestically and [problems] are going to be much more evident to the American people. It’s going to be noticed,” Nathalie Grogan, a researcher for the Center for a New American Security think tank, told Military.com.

The bulk of the Guard is made up of part-time troops who work civilian jobs full time and are generally not under the purview of commanders except for one weekend a month. Refusing orders or being delinquent typically carries less weight than infractions on active duty.

“The National Guard and Reserve have a lot less leverage over their service members than active duty because it’s not their primary source of income,” added Grogan, who studies National Guard issues.

Related: Army Cuts Off More Than 60K Unvaccinated Guard and Reserve Soldiers from Pay and Benefits