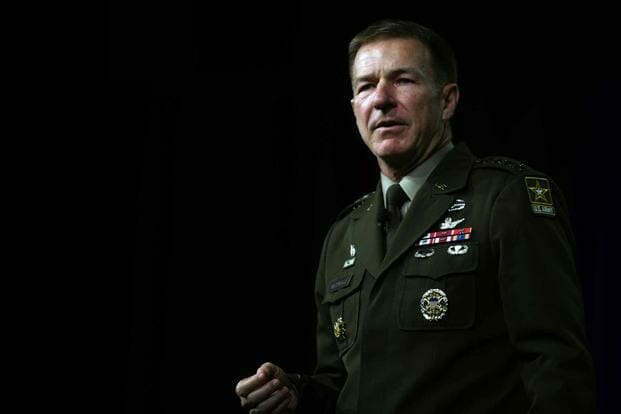 The Army’s top general said the service is not considering allowing soldiers to be reassigned to new bases if they feel local laws discriminate against them, following Republican criticism after the service recently began mulling the idea.

Gen. James McConville, the Army’s chief of staff, on Wednesday shot down the proposed policy tweak service officials were considering behind closed doors, as first reported by Military.com in May. The move would have updated the Army’s so-called compassionate reassignment policy — typically reserved for troops to transfer bases in cases of family or health emergencies — to allow soldiers to transfer to a new state if laws discriminate against them based on sex, religion, gender or pregnancy.

The news comes amid Pentagon and Biden administration concerns over the impact of abortion rights being abolished in many states following a Supreme Court decision in June striking down Roe v. Wade. The move by Army planners to look at revamping compassionate reassignment rules was also at least partially motivated by Florida’s new law critics have dubbed the “Don’t Say Gay Bill,” one source with direct knowledge told Military.com.

“We do have options where a soldier can say, ‘Hey, I want to serve in Alaska,’ and if we can meet those preferences, we will actually do that. But as far as, ‘I’m only going to serve in these states’ or ‘I’m going to do that.’ … It’s a contract. … You could say, ‘I’d like to go to one of these places’ and, if we can make it work, we’ll try to make it work for them,” McConville told Defense One.

The Army gives new recruits the option to choose their first duty station, with limitations. But that new effort is tied to recruitment incentives and not related to protecting soldiers from potentially discriminatory state and local laws.

A spokesperson for McConville did not immediately return Military.com’s request for comment.

Sergeant Major of the Army Michael Grinston, the service’s top enlisted leader, told lawmakers in May that the force was considering some response to the end of the landmark 1973 legal decision, which legalized abortion and triggered decades of Republican opposition.

The new Supreme Court decision has reignited the abortion debate between Republicans and Democrats as the politically polarlized nation wrestles over other cultural and civil rights issues.

The Pentagon, under Democratic President Joe Biden, insisted that troops’ access to abortion services would not be interrupted following the June decision by the high court. But it also acknowledged that service members in states such as Texas, Oklahoma and Louisiana, where laws have banned abortions or dramatically curtailed them, could face legal jeopardy if they seek out the procedure.

The Department of Veterans Affairs announced Sept. 2 it would provide abortions to covered veterans and dependents in cases of rape, incest and danger to the life of the mother, effectively lifting its ban.

The Florida law, officially called Parental Rights in Education, bars teachers from referencing sexual orientation or gender identity to their students between kindergarten and third grade, among other things. Signed by Republican Gov. Ron DeSantis, the law has become a political lightning rod and target of Democrats amid the larger debate over LGBTQ rights, especially for schoolchildren.

The law on schooling provided the Army’s rationale for considering tweaks to its compassionate reassignment rules — to protect gay soldiers from a state that targets them and potentially their spouses and children, according to a source with direct knowledge.

The Army is struggling with a recruiting crisis — and with attempts to court recruits in Gen Z, who are coming of age on the tail end of the Millennial generation. It has made some inroads with women and, to a lesser extent, gay Americans. Roughly 1 in 6 Gen Z adults identify as LGBTQ.

But reassigning soldiers might have been infeasible in the end, given most Army bases are in Republican-dominated states and those decisions would have to be made by local commanders, who would weigh the overall needs of their units.

Such a policy would have likely been a political minefield for the Army. Republican lawmakers and right-wing pundits immediately blasted the idea.

“While the official party line is, ‘We are advocating for our troops,’ it would seem these policies may have a more nefarious objective: siphoning military personnel, equipment and the money and jobs that come with them from Red states to Blue states,” Rep Matt Gaetz, R- Fla., wrote in an op-ed for a Florida news site.

Gaetz introduced an amendment into the must-pass National Defense Authorization Act barring the services from creating such rules, but it was shot down in the House Armed Services Committee, which is led by the Democratic majority.

Democrats in the House mulled their own amendment to codify the Army’s proposed policy change into law, but it was never introduced.

Related: Navy, Air Force and Marines Say Transfers over Discriminatory State Laws Possible, But No Sign of Requests Yet