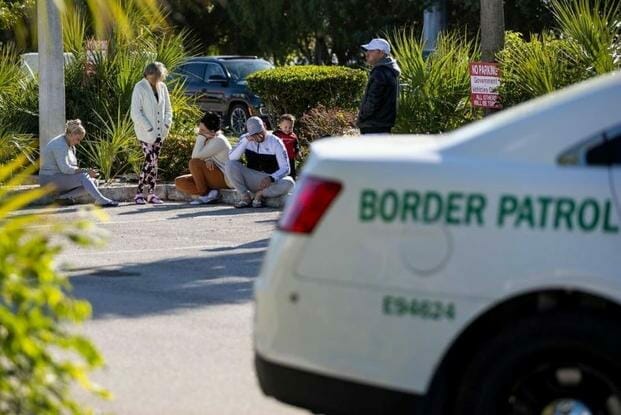 Gov. Ron DeSantis declared a state of emergency Friday and called out the state National Guard as the arrival of hundreds of Cuban and Haitian migrants in South Florida overwhelmed local authorities and raised fears of a major migration event.

DeSantis said the surge in migrant arrivals in the Florida Keys is “likely to constitute a major disaster” and called on the Florida National Guard to respond. He said the state will also be using Florida Fish and Wildlife Conservation Commission vessels, and if necessary “support water interdiction.”

He said the state will also be sending helicopters and airplanes to help authorities reach and “ensure the safety” of migrants when they attempt to reach the Florida shore.

The DeSantis administration will be responding to the situation and helping with migrant arrivals as long as there is a state of emergency in place, an executive order signed by the governor Friday said.

Under the state of emergency, some DeSantis administration officials will have the authority to suspend the effect of any state law, rule or order that may block them from responding to the situation. That means local ordinances could be temporarily suspended and rules dealing with issuing contracts and spending can be waived.

“I find that the demands placed upon funds specifically appropriated to local agencies for disaster relief or response are unreasonably great and that such funds may be inadequate to pay the costs of coping with this emergency,” the governor’s executive order says.

Since Christmas, almost 500 Cubans and 130 Haitians have arrived in the Florida Keys. Forty-five migrants illegally entered Key West on Thursday alone, and according to DeSantis’ office, more migrants are currently on their way to Florida by boat.

It is unclear how much the state expects to spend to respond to the sudden spike in migrant arrivals.

DeSantis’ office told the Herald/ Times on Thursday afternoon that the governor was aware of the situation and was working on responding to it. By 4 p.m. on Friday, the Florida National Guard had been activated.

In a statement, DeSantis blamed President Joe Biden’s immigration policies for the jump in migrant arrivals. He said his policies put the burden on local law enforcement who “lack the resources to deal with this crisis.”

“That is why I am activating the National Guard and directing state resources to help alleviate the strain on local resources,” DeSantis said in a statement. “When Biden continues to ignore his legal responsibilities, we will step in to support our communities.”

The mention of Biden drew backlash from Florida Democrats, who said that while the influx of migrants into South Florida needs to be addressed, they believe DeSantis is using the issue for political reasons.

“His press release mentioned President Biden’s name five times but never mentioned the hardliners in Congress who’ve spent years campaigning on our broken immigration system but never working towards a real solution,” said state House Minority Leader Fentrice Driskell, a Democrat from Tampa. “The Biden administration inherited this problem, they did not cause it.”

In an executive order, DeSantis made a point of drawing a distinction among some of the migrants. The order noted that Florida has a history of “assisting refugees, including Cubans and others fleeing communist regimes.”

Monroe County Sheriff Rick Ramsay said he’d been in frequent contact with the governor before DeSantis issued the executive order.

Ramsey said he is relieved that his staff, officers and first responders for other agencies will get some relief now that the state is getting involved.

“This is a crisis for us,” Ramsay told the Miami Herald. “So far, definitely the state of Florida has been amazing and they stepped up and have been very responsive.”

Ramsay expects the National Guard will first show up in the Keys with airplanes, rather than troops on the ground.

“Air National Guard is good,” he said. “I wouldn’t mind them bringing down some air assets and crews to look for and help identify these targets before they hit the ground.”

It was not immediately clear Friday evening if Florida Fish and Wildlife Conservation Commission officers will be doing at-sea interdictions, which is the function of federal law enforcement officers with the Coast Guard and U.S. Customs and Border Protection’s Air and Marine Operations.

Ramsay said that he is keeping an eye on the effects of a new measure the Biden administration has implemented in relation to immigration.

Biden announced on Thursday that his administration will dramatically expedite the expulsion of Cubans, Haitians and Nicaraguans back to Mexico if they cross the U.S. border illegally.

Ramsay worried the policy change, which would close off the more-traveled route across the U.S. Mexico border, may encourage even more people to attempt to reach Florida by sea.

“Because now, that’s virtually being shut down, or so they say,” he said. “We’re concerned that some of those people are still going to decide to come, but will now decide to go through the Caribbean to the closest point, being Monroe County.”

© Copyright 2023 Miami Herald. All rights reserved. This material may not be published, broadcast, rewritten or redistributed.