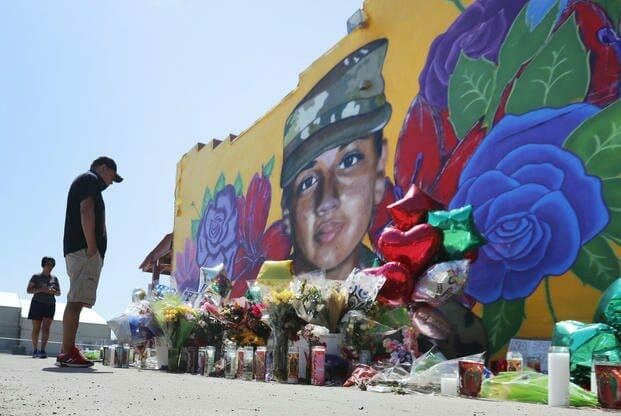 AUSTIN, Texas — The only suspect arrested in connection with the killing of Vanessa Guillén at a Texas military base in 2020 pleaded guilty Tuesday to charges that included helping dispose of the soldier’s body near Fort Hood.

Cecily Aguilar, 24, pleaded guilty in a federal court in Waco, Texas, to one count of accessory to murder after the fact and three counts of making a false statement, according to the U.S. Attorney’s Office. A sentencing date has not yet been set, but Aguilar faces up to 30 years in prison and a $1 million fine.

According to federal and state authorities, Aguilar helped her boyfriend Army Spc. Aaron Robinson, 20, of Calumet City, Illinois, kill, dismember and dispose of Guillén’s body in the woods. Robinson died by suicide on July 1, 2020, the day that Guillén’s remains were found.

“Cecily Aguilar’s guilty plea today was another step on the long path toward justice for Vanessa, my client, and her courageous family,” attorney Natalie Khawam, who represents the Guillén family, said in a statement.

Lewis Berray Gainor, Aguilar’s defense lawyer, did not immediately respond to a request for comment.

Guillen’s death and claims by her family that she was harassed and assaulted at the Texas base sparked a social media movement of former and active service members who came forward about their own experiences using the hashtag #IAmVaessaGuillen. State and federal lawmakers passed legislation in 2021 honoring Guillen which removed some authority from commanders and gave survivors more options to report.

Guillén had been declared missing since April of 2020. According to a criminal complaint, Aguilar helped Robinson dispose of Guillén’s body after he bludgeoned her to death. Guillén’s family has said that they believe she was sexually harassed by Robinson.

Aguilar, a civilian, later helped Robinson mutilate and hide her body, according to authorities.

Two weeks after Guillen’s remains were found, Aguilar originally pleaded not guilty to three conspiracy charges. Authorities say Aguilar had confessed to her role, and a judge dismissed an attempt by her defense team to have the confession thrown out over claims that investigators did not first read her Miranda rights.