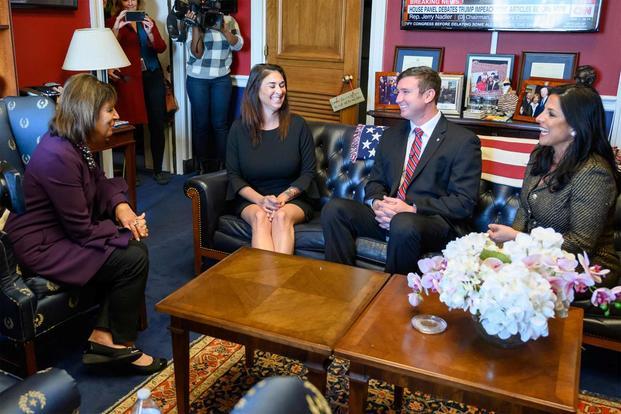 Army Master Sgt. Richard Stayskal won a major victory two years ago for troops injured as the result of malpractice in military hospitals and clinics. A bill named for the Green Beret became part of the annual 2020 defense policy bill, allowing service members to file claims for personal injury or death caused by providers in Defense Department health facilities.

For Stayskal, the issue was deeply personal: In 2017, physicians at Womack Army Medical Center failed to follow up on a three-centimeter mass in Stayskal’s right lung, a node later determined to be lung cancer.

Barred from suing the government by legal precedent, Stayskal fought for the right to file medical malpractice claims. The day the new law went into effect, at 12:01 a.m. on Jan. 1, 2020, he and his attorney filed his claim.

More than two years later, however, Stayskal is still waiting for compensation from the military. He is not alone. Of the hundreds of service members and families who have filed medical malpractice claims against the military medical commands and DoD, few, if any, appear to have been paid, according to Stayskal’s attorney, Tampa-based Natalie Khawam.

And most don’t have time on their sides.

“I think they hope I die,” Stayskal said Monday during an interview in Washington, D.C. “Who is going to listen to families, and what families are going to fight this long? They don’t want to put themselves through this.”

Navy officials told Military.com last July that the Department of the Navy, which also treats the Marine Corps, has 85 claims requesting a total of roughly $941 million. Navy officials said at the time they had not made decisions on any claims and would begin the process after they received direction from the secretary of defense.

None of the services, however, responded to a request this week for an updated number of claims or payouts. Khawam said she has been told that two Navy claims have been approved, for $10,000 and $20,000.

The system for filing claims was launched on July 19, 2021, although service members were legally allowed to file as soon as the bill became law.

The rules call for service members or their families to file claims, along with relevant supporting evidence, through their military branches. They’re supposed to have the right to appeal rejections, but there is no opportunity for judicial review.

Khawam said the rules do not specify who actually reviews the claims and issues denials. During an interview, she said that denials her clients have received arrive without any explanation or directions for a potential appeal.

“There’s something very unsettling about this process. There’s no transparency. We have no idea who is making the decisions,” Khawam said. “It’s the fox watching the henhouse. The people who made the mistakes are making the decisions — they are the judge and jury.”

The U.S. Supreme Court ruled in 1950, in a group of cases known collectively as Feres v. the United States, that troops may not sue the federal government for injuries deemed incidental to military service, including medical malpractice.

The Stayskal legislation did not change or repeal Feres, but it provided a pathway for troops harmed by neglect or malpractice to receive compensation.

By law, troops may now file claims for harm caused by military or civilian physicians in military hospitals and clinics, including dental facilities, but they cannot make a claim for medical malpractice that occurs in a combat zone or on ship.

Under the rules, claims seeking less than $100,000 are to be paid out directly by the Pentagon, while the Treasury Department is responsible for reviewing and paying claims that the DoD approves above that amount.

Stayskal has not revealed how much he sought in his claim. But he and Khawam say they have not received any offer or movement and are growing frustrated, especially as the Army seeks to medically retire him or force him to take full retirement this summer, when he reaches 20 years of service.

For Stayskal, retirement means he will lose access to active-duty health care, which currently covers the entire cost of his treatment, including airfare to Tampa, where he is treated at the Moffitt Cancer Center.

Retirement will mean paying enrollment fees and copays for many of his appointments and care, and transferring treatment back to Duke University, an advanced research center closer to his home but which referred him to Moffitt in the first place.

The money he’s seeking in his lawsuit would provide a means for Stayskal to continue treatment at Moffitt and also provide peace of mind for his family, given the uncertainty of the course of his illness and the clear potential for an early death, he said.

“It’s for the years that I’m not here, the [loss of income] I otherwise would provide for my family, for putting the kids through school,” Stayskal said.

Stayskal and Khawam were to meet Wednesday with Army Secretary Christine Wormuth to discuss his claim situation and get answers on his pending retirement.

An Army spokesman said Tuesday that the U.S. Army Claims Service is currently reviewing Stayskal’s claim and continues to keep Stayskal and Khawam apprised of the process.

Lt. Col. Gabriel Ramirez added that there is no ‘”typical” or “normal” processing time for medical malpractice claims.”

“Medical malpractice claims often involve the review of voluminous medical records and other evidence, as well as interviews of medical providers, claimants, witnesses, and expert medical consultants. The time taken to process any claim depends upon the complexity of the facts,” Ramirez said.

In reflecting on his experience, Stayskal said he doesn’t blame the Army for the delay; instead, he blames individuals in the system who are seeking to save money and, by doing so, bolster their careers.

“Every single day, I feel my neck for lumps and bumps. If I don’t feel well when I wake up, I think ‘Is this it?’ I guarantee you that if any of those people were in my shoes, they’d be like, ‘We need to finish this thing today.'”