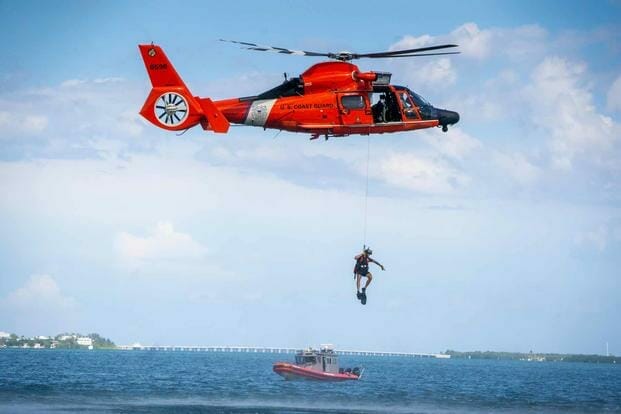 In January 2019, members of the Coast Guard went a month without pay — the only part of the armed forces forced to work for free during the longest U.S. government shutdown in history.

The Senate Committee on Commerce, Science and Transportation wants to make sure it never happens again.

Among the personnel initiatives in the Senate’s 2022 Coast Guard Authorization Act, which extends through fiscal 2023, the Treasury Department would ensure that active-duty Coast Guard men and women, as well as reserve members on active duty, would get paid during shutdowns stemming from a federal funding gap.

During the 35-day shutdown in 2019, the Coast Guard, which is nested in the Department of Homeland Security rather than the Department of Defense, scrambled to cover pay for the first paycheck of the month but worked without pay through the second pay period, sending many members to food banks and relief organizations.

“The Coast Guard can always be counted on to save American lives, protect our homeland, and keep maritime transportation flowing safely, but it is time we do better for our service members,” Sen. Roger Wicker, R-Miss., said of the legislation during a hearing Wednesday.

The bill, which would provide $14.94 billion for the service for fiscal 2023, includes a number of provisions aimed at improving quality of life for Coasties, including increased funding for child care services and improvements to medical services.

The legislative proposal would expand the service’s child care subsidy program that reimburses families for private child care services and gives the service flexibility to set fees at Coast Guard child development centers with the aim of reducing costs for families with more than one child.

It would improve access to medical care and training by requiring the service to review its health staffing and capabilities and establish a new behavioral health policy, to include guidance for handling members with post-traumatic stress disorder. And it requires the Coast Guard to study its telemedicine capabilities at remote duty stations and on ships.

It also features a first-among-services, five-year pilot for members to access fertility treatment, allowing them to request reassignment to areas where services are available, including military treatment facilities, or accessing treatments not covered by Tricare through a private provider.

The Tricare health program covers diagnosis of illnesses that can cause infertility and correction of any medical issues that might be the source of the problem but does not cover IVF or artificial insemination.

The bill also would allow Coast Guard Academy cadets who become parents to retain their parental rights, graduate and commission.

Until this year, students at the DoD service academies were required to resign and, depending on how long they were in school, repay the cost of their education, or request a leave of absence up to one year and give up parental rights tied to their children in order to return to school.

But a provision in the fiscal 2022 National Defense Authorization Act — sponsored by Sens. Kirsten Gillibrand, D-N.Y., and Ted Cruz, R-Texas, required the DoD to rewrite its policy and allow cadets and midshipmen to have children. The Coast Guard bill would require a similar policy change.

In December, a former Coast Guard cadet sued the service over his expulsion from the Coast Guard Academy for revealing two months before he graduated that his fiancee had given birth.

The bill also would require the Coast Guard to study its housing stock and food security among its members.

Under the bill, the Coast Guard would remain at 44,500 active-duty members, but the bill includes several initiatives to broaden diversity within the ranks. The legislation proposes that the service establish at least one Junior Reserve Officer Training Corps in each of its 17 administrative districts and requires it to develop a 10-year plan for increasing the number of women and service members from racial minority groups.

With the U.S. stepping up activity in the Arctic region to counter the increased military presence by Russia and China as well as a rise in economic interest in the area, the service will need more ships capable of performing duties in that area’s harsh conditions, the senators said.

The legislation calls for $841 million for a third Polar Security-class icebreaker, as well as $20 million for an Arctic Security Cutter program office, which would oversee the next generation of medium-sized icebreakers.

It also funds a Great Lakes icebreaker similar to the Coast Guard cutter Mackinaw, a heavy icebreaker that keeps the channels and harbors of the lakes open to shipping in the winter.

The bill passed the committee in a unanimous vote; it now heads to the full Senate for approval. Any discrepancies with the bill passed in the House must be reconciled before it can become law.