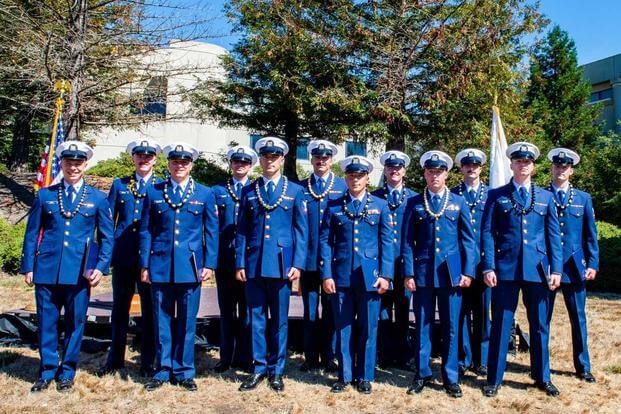 The Coast Guard graduated its first West Coast class of rescue swimmers last month after the elite course was forced to relocate this year due to a “critical facilities issue” at its Elizabeth City, North Carolina, training center.

A dozen Coast Guard members became the first aviation survival technicians to graduate the rating’s “A” course at Coast Guard Training Center Petaluma. The California installation will house the AST course for several years while the service’s Rescue Swimmer Training Facility can be repaired at the Coast Guard Aviation Technician Training Center, or ATTC, in Elizabeth City.

Coast Guard officials described the problems at the Elizabeth City facility as “safety concerns” and “training wear and tear,” and did not elaborate when pressed for details.

The $25 million North Carolina facility, which contains a 1.2 million-gallon main pool with weather and wave machines that can create stormy ocean conditions, is just 10 years old.

To prepare Petaluma for the course, AST instructors have worked since the start of the year to assess the facility and revamp the training to ensure it met “the same standards and performance requirements to graduate,” according to Lt. Cmdr. David Blue, the training officer at ATTC.

As a result of differences at the facilities, however, some modifications were made to training techniques and scenarios, such as teaching the course’s emergency medical technician portion as a stand-alone module before the rescue swim portion rather than following graduation, according to Capt. Matthew Chong, Training Center Petaluma commander.

The rescue swimmer skills phase of the training also was split between Petaluma and Norfolk, Virginia. According to Chong, roughly 75% of the cohort completed the course — “historically high,” for a program with an average attrition rate of more than half.

“The Coast Guard has a critical shortage of aviation survival technicians throughout the enterprise and we knew the extra work necessary to make this happen was well worth the effort to continue populating the service with these dedicated and crucial Coast Guardsmen,” Chong said in a press release. “We are very excited about the success of this first class.”

The Coast Guard trains roughly 15 to 30 rescue swimmers each year during the 22-week course, and the rating is considered to be one of the service’s most elite, with roughly 350 rescue swimmers serving at any given time.

Aviation survival technicians deploy to crises in all types of weather and conditions, dropping into freezing Arctic waters from helicopters to save merchant mariners and fishermen; maneuvering through hurricanes to rescue the trapped; and swinging onto cruise ships, shorelines or recreational boats to provide medical assistance in emergencies.

Training is expected to be held in Petaluma for up to three years, with the next class starting this month. According to Blue, an engineering firm is designing the repair project for the Elizabeth City facility, with a construction contract expected to be awarded following completion of that work in late 2022.

Blue did not answer questions regarding cost of the repairs, saying the project could run through early 2025.

“As the design development progresses, the project’s cost estimate will continue to be refined,” Blue said in an email to Military.com.

The new graduates will go to aviation units where they will need to complete basic aircrew and additional rescue swimmer training before earning their qualifications. ASTs who remain in the service also are required to attend Advanced Helicopter Rescue School within the first three years of earning their qualifications to refine and hone their skills, according to Blue.

The Coast Guard has a vast backlog of construction and improvement projects for its shore facilities, totalling roughly $1.7 billion, and a deferred maintenance backlog of roughly $1 billion.