Coast Guard: Medical Transport Plane With 3 Aboard Missing Off Maui 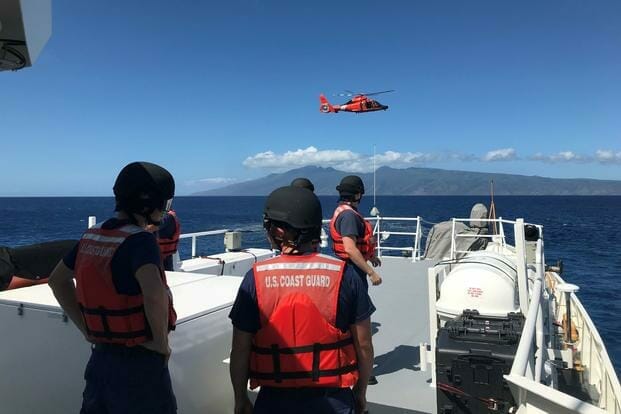 A Hawaii Life Flight plane with three crew members on board was on its way to pick up a patient on Hawaii island when it crashed in waters off Maui, leading to the suspension of medical transports by the company and an emergency backup plan for transporting patients between islands.

The Thursday night crash was within 10 hours of a crash of a privately owned Beechcraft BE77 outside of Lihue Airport on Kauai, injuring two people.

“Global Medical Response can confirm that one of our Hawaii Life Flight emergency fixed-wing airplanes based in Maui, went off radar while en route to pick up a patient in Waimea, Big Island,” a company spokesperson said in a statement.

“We are working with the Coast Guard and rescue teams, providing all information, including last known coordinates,” the company said. “Our immediate focus is helping the search and rescue teams. Please keep our team members in your thoughts.”

Hawaii Life Flight has been providing medical transportation in Hawaii 24 hours a day, seven days a week since 2010, according to the company’s website. After reports that the aircraft was missing Thursday evening, the company issued a “safety stand down, ” grounding seven other aircraft normally used to transport patients between islands.

An emergency proclamation from Gov. Josh Green will allow at least one out-of-state medical aircraft and two Black Hawk helicopters from the U.S. Army National Guard to help shore up the shortage of air ambulances transporting patients between islands.

Green said the measures in place ensure that medical services will be available as needed.

“We have to provide services to all the people of Hawaii if they get so sick in a place where they don’t have access to the care they need and have to come over here to Oahu,” Green said. “We’re ensuring people that services to get to our more comprehensive service hospitals will be available.”

An emotional Speedy Bailey, regional director of American Medical Response Hawaii, which owns Hawaii Life Flights, said in a news conference at the governor’s state Capitol office that the stand down is “a time to take care of our caregivers and deal with the issues that surround incidents and accidents like this.”

Staff aren’t working either unless they volunteer to do so, Bailey said.

Meantime, at a news briefing held at Coast Guard Base Honolulu Friday afternoon, Coast Guard spokesman Petty Officer 3rd Class David Graham said the search for the three missing Hawaii Life Flight crew members was to continue throughout the night into this morning.

According to the Coast Guard, the aircraft departed Kahului Airport and was headed to the Waimea-Kohala Airport. The Honolulu Control Facility reported losing radar contact with the plane about 15 nautical miles south of Hana.

The Coast Guard deployed the cutter William Hart, an MH-65 Dolphin helicopter, C-130 plane and a patrol boat from Coast Guard Station Maui to search for the aircraft. The Federal Aviation Administration issued an alert to public safety agencies, pilots and airports at around 9:30 p.m. in the search for the missing plane.

The Coast Guard notified FAA Thursday night that it located a debris field about 16 miles south of Hana in the area where radar contact was lost. The Coast Guard said one of its assets also reported seeing a sheen in the search area and a patrol boat recovered debris from the area “with no confirmation that it is from the aircraft.”

Weather conditions in the search area were favorable Friday in contrast to Thursday night. “Last night the weather was foul to a degree. There was some wind and some rain but today there are prime searching conditions, ” Graham said Friday.

There were no updates on the ongoing search for the missing aircraft or its three-member crew, although Green said he’s “holding out hope ” for any survivors.

Green’s emergency proclamation will continue through Dec. 27, he said at the news conference.

Medical crews from the East Coast and a medical jet from the West Coast will arrive this morning to help fill the shortage of air transportation, Green said.

Some local medical staff that can assist will also be assigned to do so.

Two Black Hawk helicopters, with U.S. National Guard medical crews, will also be made available until the jet arrives. One is already on Oahu, and the other will be stationed on Kauai or Hawaii island. State Department of Health Director Elizabeth Char at the news conference said some AMR helicopters available in the state also have the capacity to cross open ocean.

Green, an emergency room doctor, said the air ambulance shortage is a reminder that Hawaii needs more comprehensive medical services around the state, which would reduce the need to transport patients to Oahu.

Green said typically that 10-15 transfers are made per day.

Previous crashes involving medical transport aircraft have occurred in Hawaii in years past.

On March 8, 2006, pilot Peter Miller, 32, nurse Brien Eisaman, 37, and paramedic Marlena Yomes, 39, were killed after a Hawaii Air Ambulance Cessna 414A plane crashed into a car dealership on Maui. The plane was en route to Kahului Airport from Honolulu Airport to pick up a patient. A National Transportation Safety Board determined the operator’s inadequate pilot training was a contributing factor in the crash. The pilot was unable to maintain minimum controllable speed after one of the aircraft’s two engines failed for undetermined reasons. The report noted there were no procedures in the operator’s manual to train pilots in the event of one-engine failure.

On Jan. 31, 2004, pilot Ron Laubacher, 38, and paramedics Mandy Shiraki, 47, and Joseph Daniel Villiaros, 39, were killed after a Hawaii Air Ambulance Cessna 414A plane crashed into a forested area on the slopes of Mauna Kea. The plane was scheduled to pick up a patient at Hilo Airport to transport to Honolulu. An NTSB report indicated the pilot disregarded an in-flight advisory about bad weather conditions and low visibility.

Thursday’s Hawaii Life Flight crash was the second plane crash to occur in Hawaii that day.

At 12: 07 p.m., a privately owned, single-engine Beechcraft BE77 crashed about 100 feet outside of Lihue Airport on Kauai. The aircraft with a male pilot and his son on board crashed shortly after takeoff. Both were taken in stable but serious condition to Wilcox Medical Center.