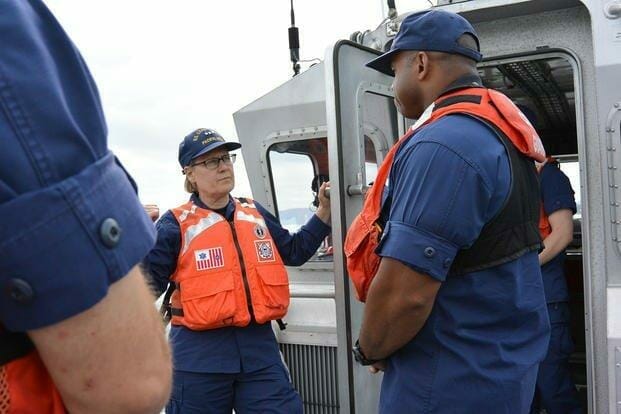 Adm. Linda Fagan, the Coast Guard’s vice commandant and the service’s most senior Marine Safety Officer, has been nominated to assume the post of Coast Guard commandant, the first woman to head any branch of the U.S. armed forces.

The announcement, first reported by USNI News, was acknowledged in a statement Tuesday from Homeland Security Secretary Alejandro Mayorkas.

“Adm. Fagan is a tremendous leader, trailblazer, and respected public servant who will lead the Coast Guard across its critical missions with honor,” Mayorkas said in a statement. “Within the Coast Guard and across the Department of Homeland Security, Adm. Fagan is admired as a role model of the utmost integrity, and her historic nomination is sure to inspire the next generation of women who are considering careers in military service.”

Fagan, a 1985 graduate of the U.S. Coast Guard Academy, became the service’s first female four-star last June when she assumed the duties of vice commandant, five years after the post became a four-star billet. She also became the third woman to serve as vice commandant, following Vice Adms. Vivien Crea and Sally Brice-O’Hara.

She rose through the ranks as a Marine Safety Officer, responsible for investigating maritime accidents, as well as monitoring merchant vessels and marine facilities, licensing mariners and overseeing safety programs.

Throughout her nearly 40-year career, Fagan worked more than 15 years as a marine inspector and has served aboard the heavy icebreaker Polar Star.

Her command assignments include overseeing Sector New York and serving as Captain of the Port of New York; leading the service’s First District; and heading Coast Guard Pacific Area, from 2018 to 2021, where she was responsible for all operations from the Rocky Mountains to Asia, a job she held before being named vice commandant.

Shortly after her promotion to admiral, Fagan laid out the service’s priorities to “CBS This Morning,” saying that the Coast Guard is committed to homeland security, maintaining a global presence, supporting and training the coast guards of other countries, enforcing drug laws and fishing regulations, and protecting the supply chain.

“We are globally deployed. That is probably a misconception — ‘Well, you’re the Coast Guard, shouldn’t you just be along the coast?’ … Homeland security. It’s about presence and law enforcement, much more than about lethality, like our Navy counterparts talk about,” Fagan said during an interview.

During the same interview, she stated her commitment to continuing changes within the Coast Guard to attract and retain women — one of her daughters, Aileen, is a Coast Guard lieutenant — and increasing recruitment of racial minorities.

“We are looking at some of the policy changes that are helping us retain women, the focus on diversity and inclusion, so we better represent the public that we serve,” Fagan said. “We’ve made a lot of progress in the junior ranks; we need to keep making progress.”

While Fagan will be the first woman to become a service chief if she is confirmed by the Senate, she will not be the first to serve on the Joint Chiefs of Staff. The Coast Guard commandant is a de facto member of the panel, lacking full voting rights.

Last year, Reps. Charlie Crist, D-Fla., and Steven Palazzo, R-Miss., sponsored a bill that would give the Coast Guard commandant full voting rights on the Joint Chiefs, but the legislation has not made it through the House Armed Services Committee.

The Coast Guard’s current commandant, Adm. Karl Schultz, a 1983 graduate of the Coast Guard Academy, is set to retire in May. During Fagan’s promotion ceremony last year, he called her a “top performer and a trailblazer.”

“Vice Adm. Fagan is an outstanding leader with 36 years of Coast Guard operations, policymaking, joint service and interagency experience,” Schultz said. “As the Coast Guard’s first female four-star admiral, and … the Coast Guard’s 32nd vice commandant, Adm. Fagan will be instrumental in moving the service forward at a critical juncture in our history.”

The White House also has nominated Vice Adm. Steven Poulin, current commander of Coast Guard Atlantic Area, to serve as vice commandant. Poulin, a graduate of the University of Miami School of Law, has previously served as the service’s Judge Advocate General and Chief Counsel of the Coast Guard. He graduated in 1984 from the Coast Guard Academy.