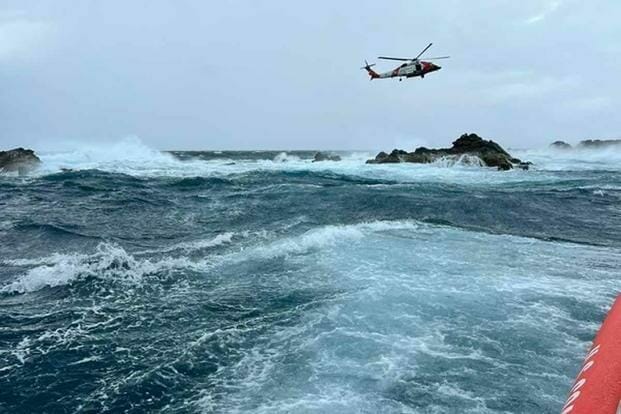 The survivor, a man believed to be over 50-years-old, was injured and holding on as six-foot seas from passing Tropical Storm Earl crashed against the rocks.

“This was a challenging case in a tropical storm with heavy seas, gusty winds, and low visibility, but this is what the Coast Guard trains for,” said Lt. Shea Smith, Coast Guard MH-60T Jayhawk aircraft commander for the case. “I’m proud of the crew, everyone came together as a team to safely and efficiently execute the mission. Fortunately, the survivor was able to hang on until we could arrive and we are all glad that he is safe.”

Coast Guard watchstanders in Sector San Juan received a call at approximately 8:30 a.m. Sunday from a St. Thomas 911 emergency dispatch operator, who relayed a distress communication from the friend of the fisherman on scene aboard 26-foot Grady White vessel.

Coast Guard watchstanders directed the launch of a Boat Forces St. Thomas 33-foot Special Purpose Craft and a MH-60T Jayhawk helicopter from Air Station Borinquen. Once on scene, the Coast Guard boat crew attempted to pass a heaving line to the injured fisherman but the crashing waves prevented the crew from getting close enough to reach him. The Coast Guard helicopter then moved in and deployed the aircraft rescue swimmer who used a harness to secure and hoist the survivor from the rocks.

The Coast Guard aircrew transported the survivor to the King Airport on St. Thomas, where he was transferred to waiting Emergency Medical Service personnel and transported to the Schneider Regional Medical Center.

© Copyright 2022 The Virgin Islands Daily News, St. Thomas. All rights reserved. This material may not be published, broadcast, rewritten or redistributed.