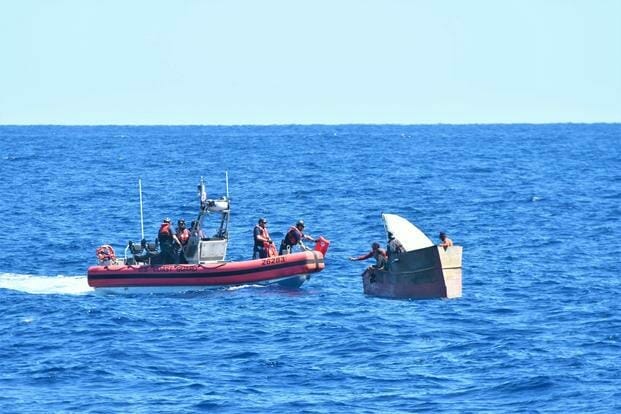 MIAMI — More than 40 migrants from Cuba arrived in the Florida Keys and Key Biscayne aboard three separate boats Friday, according to the U.S. Border Patrol.

Two of the vessels in the Keys were about 20 feet long and displayed what a veteran Florida Fish and Wildlife Conservation Commission officer called “ingenuity and desperation.”

One of them, which was still floating about a mile offshore of the Upper Keys community of Tavernier Friday afternoon, had a hull made from welded together 50-gallon fuel drums and highway guard rails. It was powered by a Russian-built diesel engine.

A plastic soda bottle was attached to the engine, used as an improvised container for oil. Strewn about the inside were cans and other food containers, as well as backpacks and at least one wallet.

“I’m surprised they didn’t take that with them,” said Jason Rafter, a Fish and Wildlife officer, as he surveyed the vessel.

One of Rafter’s main roles with the FWC is to catalog derelict vessels — including migrant boats — mitigate the environmental concerns by removing fuel that can leak into the ocean and send the information on the boats’ whereabouts so Monroe County can arrange to have them removed.

Rafter’s job got much busier this year. Not only are the Keys the destination for most boats involved in the largest maritime migrant increase from Cuba in nearly a decade, Hurricane Ian left more than 100 displaced boats of all kinds throughout the the island chain after it whirled past late last month.

On Friday, Rafter pointed out how resource-intensive each migrant landing is in South Florida, noting that FWC, the Coast Guard, Border Patrol and local fire rescue medics all play a part initially when a boat arrives. Then, once the vessel is cataloged, Monroe County’s Marine Resources department gets involved to arrange for its eventual removal.

Getting to all the vessels with migrants aboard that have landed over the past two years is a huge task, however. They’re arriving faster than they can be removed., and it’s becoming increasingly common to find them abandoned in the shallow waters or wedged in the mangroves.

“They’re really cool boats, and it’s a shame to see them come over here and then they just sink,” said local fishing guide Mark Cockerham, who has taken to towing the vessels on his flats boat and preserving them. “There’s been so many lately, everybody is just basically ignoring them, and then there they are.”

Between the end of September 2021 and the beginning of October, the Coast Guard has stopped 6,182 people at sea trying to migrate to South Florida — the highest number in seven years.

“We’re definitely back up to pre-storm levels,” Groll said, noting there was a dip in activity as Ian steamed past the Keys and up the West Coast of Florida. Tragically, a group of Cubans did make the dangerous journey in the midst of the powerful hurricane, killing seven people.

A Coast Guard cutter returned 68 people to Cuba Friday who were stopped in four incidents between Monday and Tuesday, Groll said.

The exodus is being driven by deteriorating political and economic conditions on the island nation.

The boat off Tavernier Friday carried 12 men and two women, said Adam Hoffner, division chief for U.S. Customs and Border Protection’s Miami operations. They jumped off the boat before it reached shore, and swam as much as a mile to shore, arriving in a residential neighborhood around 7 a.m.

The crew of a small Coast Guard boat towed the vessel away from the channel off Tavernier Creek Friday afternoon.

The other group to arrive in the Keys Friday came in a wooden boat that appeared sturdier that most vessels that come ashore the archipelago. They made landfall on the ocean side of the Indian Key Fills area in the Village of Islamorada.

In the Key Biscayne group were nine adults and one accompanied child, Hoffner said. They told agents they left the Caibarien municipality Oct. 6.

“That means they were at sea for over eight days,” Hoffner said.