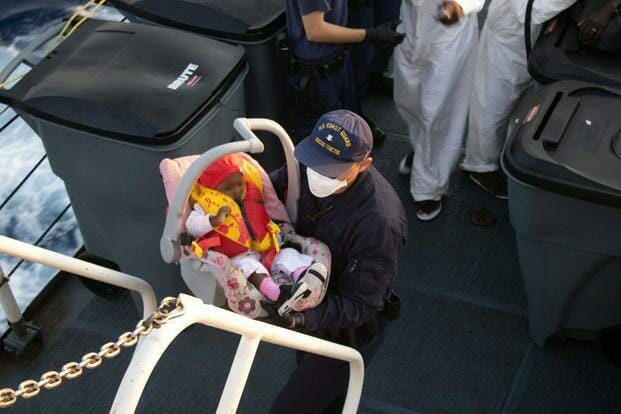 At least four children wearing orange life jackets — including an infant in a baby car seat — are seen on video being escorted from the Coast Guard Cutter Thetis to a Haitian boat.

The youths are part of a group of 88 migrants that were repatriated after being detained Tuesday approximately 18 miles north of Sagua La Grande, Cuba, the Coast Guard announced in a news release. They were all found in good health, the military branch reported.

A Coast Guard airplane crew alerted Key West staff of a “grossly overloaded vessel,” according to the agency. When the crew arrived on scene, they reported the boat also was taking on water.

According to the Coast Guard, there were 62 male and 26 female migrants on the vessel. The military branch did not say how many of them were minors.

“We ask families in the U.S. not to encourage their loved ones in Haiti to make this dangerous journey,” said Lt. Connor Ives, Coast Guard District Seven enforcement officer. “The risk for loss of life is great on these unsafe vessels.”

The Coast Guard tallies the number of migrants detained by fiscal year, which begins in October and ends in September of the next year. Since Oct. 1 of last year, the military branch has detained 3,060 Haitian migrants, a nearly 51% increase compared to the last fiscal year when 1,527 were detained.

Here are the number of Haitian migrants detained by the Coast Guard in recent fiscal years:

On March 11, nearly 200 migrants were returned to Haiti by the Coast Guard after their overloaded sailboat ran aground behind a wealthy North Key Largo resort in the Upper Florida Key.