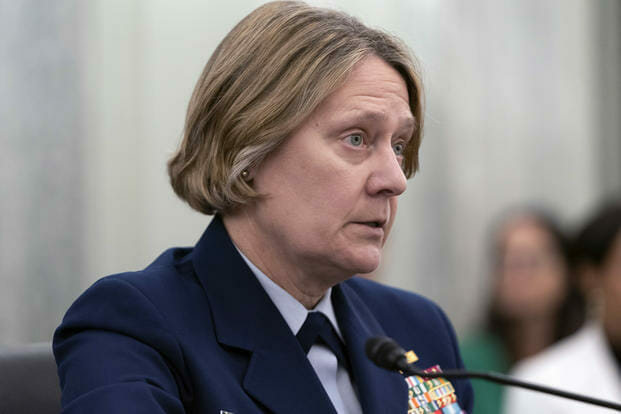 The Coast Guard must invest in its workforce, providing opportunities for training and promotion at modern shore facilities and on updated ships and aircraft, Commandant Adm. Linda Fagan told members of Congress last week.

Without upgrades to the service’s workforce management system, she said, the Coast Guard will not be able to recruit and retain the talent it needs to meet its mission.

“The most significant and most critical to the service is transforming our talent management system and addressing workforce issues,” Fagan said in her first appearance as commandant before Congress, testifying before the House Homeland Transportation and Maritime Security subcommittee Thursday.

Read Next: Military Retirees and Dependents With ID Cards That Don’t Expire Need to Get Replacements Within 4 Years

Data provided by the Coast Guard shows the service has not met its recruiting goals since 2018, falling short an average of 20% each year from 2019 through 2021.

Not surprisingly, the service’s worst year was 2020, when COVID-19 lockdowns prevented potential recruits from meeting recruiters. During that pandemic year, the service needed to bring in 3,700 new personnel; it enlisted 2,812.

Fagan said that, as the military recruitment pool shrinks and fewer Americans meet the physical qualifications to join the military, the branches all are competing for talent.

“We … need to get after policies that have served us well but do not continue to serve as well as we move forward in a way that is reflective of society and the work that we are asking our workforce to do,” Fagan told the panel members.

The military branches have struggled in the past several years to fill their ranks, facing a competitive job market, declining public trust and a decrease in visibility following the end of the Afghanistan War.

The Army, having hit just 40% of its recruiting goals more than halfway through this year, has started offering enlistment bonuses of up to $50,000 and is allowing some recruits to choose their first duty station.

The Navy announced in April it would offer bonuses up to $25,000. In June, the service also announced that sailors may apply for a delay in separation or retirement and that it will waive “high-year tenure” requirements — the limit on how many years of service a sailor can remain at various ranks — so they can stay up to another year.

Fagan said the Coast Guard is not considering bonuses for enlistment — she called them a “stopgap” measure — but said policy changes are needed to draw people in and keep them.

For example, she said, civilians with certain professional credentials or experience should be able to join the service at a higher paygrade, and personnel should be able to defer promotion for a year if they are in a duty station where they want to stay.

“We haven’t ruled bonuses out, but I believe, fundamentally, when you look at the generation that we’re recruiting, you may draw them in with money but you won’t be able to keep them. This is why the structure around talent management, the policy around how we’re doing it, has to be transparent and, really, we need to bring it into the current state of being,” Fagan said during an interview with Military.com.

Fagan’s predecessor, Adm. Karl Schultz, rolled out a number of initiatives designed to draw more recruits, especially women and Americans from racial minority groups, to the service to ensure that it mirrors “the great diversity of the American people we are honored to serve,” Schultz said in a hearing in June 2021.

Schultz implemented policies that allowed Reserve members to fill in for active-duty personnel while they take up to 120 days for parental leave; changed body composition and grooming standards; and adjusted assignment policies to attract and retain more personnel.

And he created a cadre of Coasties trained to lead diversity and inclusion training at units across the service.

The Coast Guard’s recruitment goals include 25% women and 35% from racial minority groups.

Fagan said she is committed to continuing Schultz’s diversity and inclusion initiatives, which is why she hasn’t published her own.

“I have no intention to back away from [Schultz’s plan]. … We are continuing to action the one that he signed out. That is ongoing work and continues to be critically important,” Fagan said.

During the hearing, subcommittee Chairwoman Rep. Bonnie Watson Coleman, D-N.J., said she was “particularly concerned” that the number of women and those from racial minority groups serving in the Coast Guard is low and declines significantly as the ranks progress.

While the Coast Guard Academy has the highest female population of any service academy, at 38%, the service’s entire active-duty force is 15% women. Black men and women make up 6% of the service, compared with 14% in the general U.S. population.

“It is also my hope that the next three years will be a time of growth and success for the Coast Guard with more women, people of color and members of the LGBTQ community rising through the ranks and building off of your success,” Watson Coleman said.

Florida Rep. Carlos Gimenez, the panel’s ranking Republican, suggested to Fagan that the service consider permitting military personnel to serve in one place for an extended period, allowing them to set down roots in the community.

“The armed services in general have people moving all around the place … and it may be OK for people that may be single or not attached, but for families, that’s a really tough thing. That may be something we need to look at culturally … may help out in recruiting,” Giminez said.

After the hearing, Fagan illustrated that all Coasties can recruit. She was approached by a young woman who said she planned to join the service following college. Fagan, whose daughter is a Coast Guard officer, spent 10 minutes with the woman, asking her about her interests and plans and telling her about the opportunities.

Fagan then handed her a business card with a point of contact.

“Make sure we follow up,” Fagan instructed her staff. “That’s what we’re talking about.”