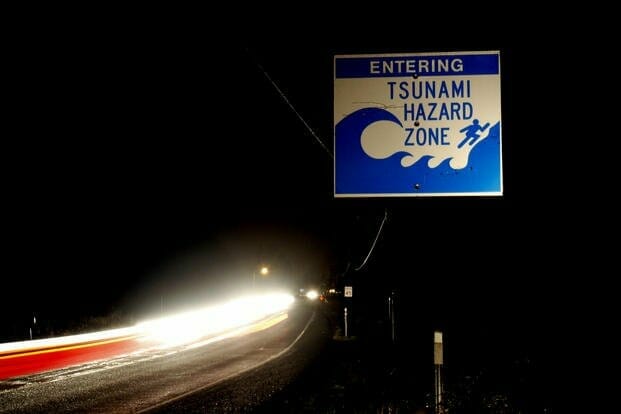 Coast Guard units stationed in the Pacific Northwest are not prepared to deal with the impact of a tsunami, according to a government watchdog.

In a report published by the Government Accountability Office (GAO) last week, investigators say that “only 19 of the 39 Coast Guard units at risk in this region have a written tsunami evacuation plan for personnel and their dependents.” Plus, the authors say that the service “does not provide guidance to units that create evacuation plans” — meaning those plans that do exist vary widely.

The area in question, mainly defined by the coastline of Oregon and Washington, runs along a “700-mile long ‘megathrust’ fault that stretches offshore from Northern Vancouver Island to Cape Mendocino, California,” according to a state agency report. It’s part of the “Ring of Fire,” a constellation of volcanoes that encircles the Pacific Ocean and leaves the Pacific Northwest vulnerable to earthquakes and tsunamis.

“Stresses have been building along the fault in the more than 300 years since, putting the Pacific Northwest at risk of another catastrophic seismic event,” that report, written in 2016, warned, alluding to the last megathrust earthquake along the faultline that occurred in 1700.

Coast Guard leaders for the area — District 13 — “acknowledged variation in the contents of each plan” and told investigators that they neither “developed [nor] provided tsunami-specific guidance or templates to units.”

Only four of the 19 plans included a map of an evacuation route, with only three including details on the evacuation of military dependents.

Other variations between plans included when evacuations would commence. According to the report, seven plans had evacuations start when “major seismic activity” is detected; the remaining 12 had service members and families waiting for an official tsunami warning.

A 2016 Washington State report on a tsunami preparedness exercise warned that, if a tsunami were to hit the area, “the response infrastructure [would be] severely damaged.” The report also stressed that the resources that would normally be used to deal with a disaster like a wildfire or flooding would be in the tsunami impact zone.

The GAO’s analysis noted that a major tsunami in the Pacific Northwest could “cause $134 billion in economic losses and endanger thousands of people.”

The Coast Guard also participated in that Washington State exercise, but the GAO report noted that “it has not addressed known evacuation and response gaps” discovered at the time. According to the analysis, the “Coast Guard had not resolved 65 percent (46 of 71) of the recommended actions.”

The report recommends that the service make sure units in the region develop evacuation plans, leaders provide units with guidance on how to make those plans, and that those plans are shown to be practical and feasible through regular exercise.

Related: Coast Guard Sidelines Cutter Commander After Mishap on Board