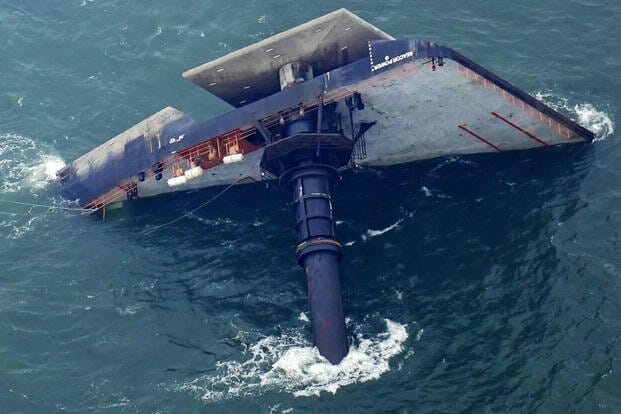 NEW ORLEANS — An outage involving a Coast Guard marine warning system and “data gaps” in radar systems were factors in last year’s deadly capsize of an oil industry vessel during severe storms off of Louisiana’s coast, the National Transportation Safety Board said in a report issued Tuesday.

Thirteen of the 19 people aboard the Seacor Power died after the offshore vessel capsized in the Gulf after leaving Port Fourchon. Known as a lift boat, the vessel had three legs that could be lowered to the sea floor, converting the ship to an offshore platform for servicing oil and gas facilities. It had been chartered by Talos Energy LLC for work on a Gulf platform when it was hit by high winds in rough seas and capsized on April 13, 2021.

An NTSB preliminary report had said the Seacor Power had begun to lower its stabilizing legs and was trying to turn to face heavy winds when it flipped in the Gulf of Mexico. Six people were rescued.

The NTSB said in Tuesday’s report that the captain of the Seacor Power made a “reasonable” decision to get underway the day of the disaster. But he didn’t have sufficient weather information from the lift boat company.

“Additionally, due to a Coast Guard broadcasting station outage, the SEACOR Power crew did not receive a National Weather Service Special Marine Warning notifying mariners of a severe thunderstorm that was approaching,” the report said.

Another problem: a lack of low-altitude radar data that prevented the National Weather Service from identifying and forecasting heavy winds that hit the vessel. The report suggested that the weather service, the Federal Aviation Administration and Air Force jointly consider lowering radar angles to improve coverage.

Multiple recommendations for the Coast Guard were included in the report. It suggested development of a procedure to let mariners know when navigational broadcasting is out; modification of regulations to require that lift boats be constructed for greater stability; and development of procedures to involve participation of commercial, local government and non-profit air rescue providers in rescue operations. The Coast Guard also should require that everyone employed on vessels in “coastal, Great Lakes, and ocean service” have personal locater beacon devices.

If the crew members and offshore workers aboard the SEACOR Power had been required to carry such devices, “their chances of being rescued would have been enhanced,” the report said.