Progress Reported at the USS The Sullivans; Its Stern Has Begun to Float Again 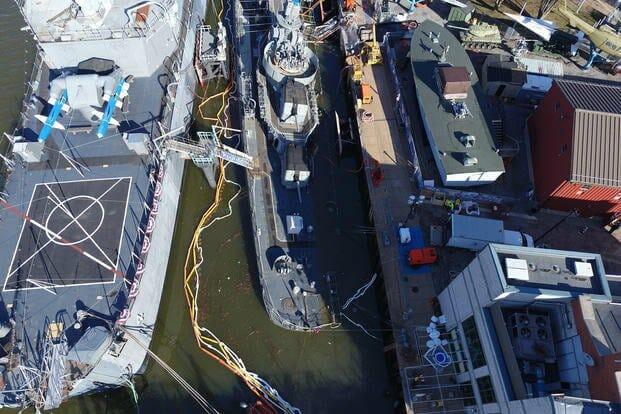 In the more than two weeks since the USS The Sullivans began to list to its starboard side, stern expressions were common when officials discussed the state of the sinking naval ship.

The news improved significantly Friday, however, as the U.S. Coast Guard and Buffalo Naval Park revealed that more than 33 holes have been plugged and the ship is not listing as much. The holes ranged in size from the diameter of a dime to two and half inches.

“It’s the first time in 16 days we’ve seen a lot of smiles being cracked around this whole situation,” said Paul J. Marzello Sr., president and CEO of the Buffalo Naval Park.

Among the positive developments was that the ship’s list, once measured at 20 degrees, had dropped to 4 degrees by Friday’s measurement, according to Capt. Lexia Littlejohn, commander of the Buffalo sector of the U.S. Coast Guard.

Because oily waste and water have been pumped from the ship and no further large breaches have occurred, the Sullivans’ stern — previously resting on the silt on the bottom of the basin — has begun to float again. As the stern was raised Friday, a diver discovered a hole that was previously blocked from sight. The hole was being evaluated before its repair. The ship’s bow still touched the bottom of the Buffalo River.

T&T Salvage, an international recovery organization hired to help guide the Sullivans’ rescue, had its plan to refloat the decommissioned U.S. Navy destroyer approved by a U.S. Coast Guard team, Littlejohn said. Twenty-two water pumps were on board on Friday, but not all the pumps would be used at once, Littlejohn said.

Officials noted that the Sullivans’ path to recovery could reach a new phase early this week. The emergency operation, which required help from T&T and the U.S. Coast Guard, would conclude and the previously planned repair phase — conducted by the Naval Park and BIDCO Marine Group — would begin. The repair phase, which was planned in 2018, long before the breach 16 days ago, will use two-part epoxy to patch or plug holes in the Sullivans’ hull and is expected to take roughly three months.

Several benchmarks need to be met before this phase change, however.

“Once we get the vessel up to an even keel, right up to the point it’s stable, we’ll conduct another assessment,” Littlejohn said. “We’ll send divers around the entire vessel and make sure it’s stable in a sense to where we can depart the scene and turn it over. “

For Marzello, the head of the Naval Park, Friday’s improvement prompted an emotional response.

“The joy of seeing this historic landmark rise out of the water was a very meaningful and poignant time for all of us,” he said. “Although we’re certainly not going to take a victory lap right now, because there’s plenty of work still yet to do, we’re very pleased and very excited to be at this particular point in time.”

© Copyright 2022 The Buffalo News. All rights reserved. This material may not be published, broadcast, rewritten or redistributed.