Rio Grande Operations: How These Men Saved a Baby in the River 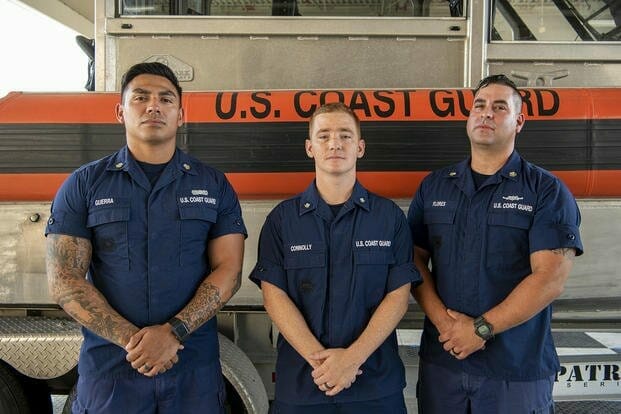 They watched the baby, facedown in the brown current, run past the boat’s propellers, swept away by the Rio Grande.

It was just before dawn on June 2, somewhere near McAllen, Texas, and US Coast Guard Boatswain’s Mate 2nd Class Jarrett Guerra shouted to the crew of the 29-foot response boat — small to save the child.

US Border Patrol had dispatched the crew from Coast Guard Maritime Safety and Security Team Houston doing temporary duty in the toe of Texas to a string of migrants crossing the river from Mexico.

“They were struggling to stay afloat, pretty much drowning,” Guerra told Coffee or Die Magazine.

One woman was clinging to his boat to keep from being swept away. The other had lost her grip on the 1-year-old.

Flores told Coffee or Die he was surprised by how deep the channel was — it was part of a largely uncharted 47-mile run of the Rio Grande toward Brownsville — but all he could think about was, “I can’t let these people die.”

He caught up to the infant and handed him up to the boat crew. Guerra said the baby had looked “pretty much lifeless. There was no breathing, no color.”

While Flores pushed the two women aboard the boat, Boatswain’s Mate 3rd Class Corey Connolly immediately began CPR on the boy, using two fingers to press on the child’s chest.

Connolly turned him on his side, and the infant “vomited milk, water, all that,” Flores said.

“Once I picked him up, he started crying, and that was when I knew he was going to be okay,” Flores told Coffee or Die.

The baby was swaddled in two wet diapers, a T-shirt, and shorts, cold from nearly drowning. Flores stripped the clothes off the child and held him to his body to warm him. Then the sun rose over the Rio Grande Valley.

By the time they reached the US Border Patrol’s emergency medical technicians at the McAllen station, the child’s condition had stabilized. He and the two women were transported to Mission Regional Medical Center for treatment.

Flores, a father of two young children, was relieved.

“Jake, he’s a pretty selfless guy,” Guerra told Coffee or Die. “He would definitely put himself in the line of danger for anyone. That’s what we joined to do.”

The Coasties made the trip south to the Rio Grande to beef up patrols usually conducted by federal agents and officers assigned to US Customs and Border Protection. When the number of Central American migrants journeying up the spine of Mexico to the international boundary rises, the Coast Guard crews can mean the difference between life and death for drowning families.

“Down on the Rio just takes it a whole ‘nother level,” Boatswain’s Mate 1st Class Keith Coddington said. “Just the call volume they have and the amount of crossings, it’s just overwhelming for them. And that’s why we get called to assist them. When then they jump in the water and you have a matter of seconds to act sometimes. And then the amount of kids you see down here is insane.”

While on patrol, the danger can go from “zero to 100 real fast,” he added.

In June alone, US Coast Guard personnel from Houston saved seven lives on the Rio Grande and assisted in rescuing 37 others.

“Sometimes you’ll get a call out from Border Patrol if they have eyes on something crossing, or honestly, you’re just driving around the corner and all of a sudden you just come across it,” Coddington said. “So very, very random on how it works down there.”

Coddington pointed to a June 16 rescue. A dozen migrants were in a raft crossing the river. The second the Coast Guard boat ripped around the bend, their coyote — the smuggler guiding the group into the US — dove into the water and began swimming to the Texas shore.

That panicked the migrants left behind, and the incident quickly became “chaotic,” Coddington said.

A child followed the smuggler, splashing to the riverbank. Another dared the current but hoisted himself back into the raft. A third tried to make it but struggled and began going underwater.

“At that point, chief, who was on the boat with me, took off his gear and immediately went into the water to grab him,” Coddington said.

Like a porpoise, Chief Boatswain’s Mate Charles Havlik dove deep under the boy and came up with the kid in his arms.

“It was a crazy sight to see,” Coddington said. “We were able to get them on the boat safe and sound.”

Coddington found himself holding the hand of a migrant struggling to stay afloat near the boat.

Within minutes, however, they transferred the remaining migrants on the raft to the Coast Guard vessel.

Then the crew handed them over to US Border Patrol agents.

“They come across, a lot of times they’re dehydrated. They’ve been walking,” Flores said. “A lot of these people come from deep South America, not always from Mexico. They’re from Guatemala, El Salvador, and they made that whole journey to get up here. They’re trying not to get caught because they don’t want to go back. But they come with what they’re wearing. They don’t have a lot of water, a lot of money, or anything. When they get in that remote section, they don’t have the energy to swim or they don’t have the energy to make it on foot to whatever their final destination is in the US.”