US Coast Guard Has Intercepted More than 3,000 Florida-Bound Cuban Migrants Since October 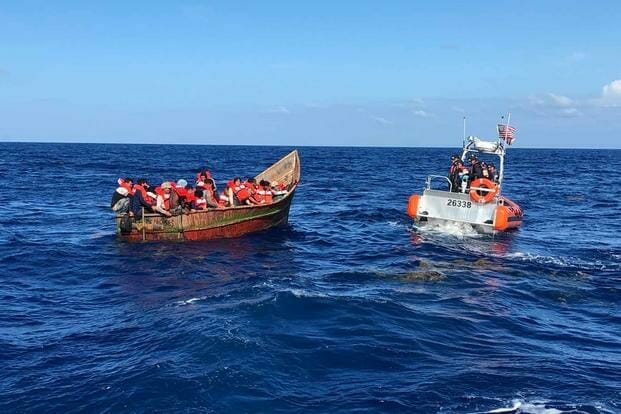 MIAMI — The U.S. Coast Guard has stopped at sea more than 3,000 Cuban migrants fleeing deteriorating economic, safety and political conditions in the island nation who were heading to the coast of Florida since October — more than the last five fiscal years combined, according to the agency.

The staggering figure comes as the Coast Guard announced it returned 64 migrants to Cuba on Sunday after locating them in four separate boats off the Florida Keys in less than 48 hours.

On Friday, civilians notified authorities of two migrant vessels. The first one was found at 8:15 a.m. 14 miles south of Boot Key; the second at 5:30 p.m. 40 miles south of Key West.

“Migrating illegally in makeshift vessels, especially without life jackets or safety equipment, is incredibly dangerous,” Lt. Paul Puddington of Coast Guard’s District Seven said Sunday in a news release. “Please, for your own safety, don’t take to the sea.”

More than 140,000 Cubans have been detained at U.S. borders between October and May, surpassing the Mariel exodus of 1980 when 125,000 Cubans departed from the Port of Mariel near Havana between April and October of that year.

The Coast Guard tallies the number of migrants detained at sea by fiscal year, which begins Oct. 1 and ends Sept. 30 of the following year. Since Oct. 1 of last year, Coast Guard crews have stopped 3,067 Cubans compared with: