Was a Boat Overloaded with Fuel a Smuggling Vessel? 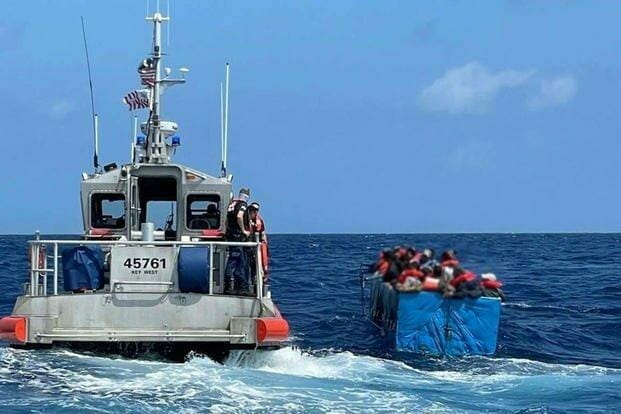 As South Florida continues to see a major maritime migration surge, deputies in the Keys arrested two Tampa men on Saturday they say may have been trying to embark on a journey to pick up Cubans and smuggle them back to the United States.

The men were found in the middle of the day by the Coast Guard almost a mile off Marathon on a boat hauling multiple containers carrying about 170 gallons of gasoline, according to the Monroe County Sheriff’s Office. The Coast Guard crew requested that the sheriff’s office come out to the boat, a twin-engine 1995 Wellcraft.

The fuel was found stowed in the boat’s cabin, said sheriff’s office spokesman Adam Linhardt. The arrest was the second time this month that a go-fast type of boat was stopped in the Keys carrying a large amount of extra fuel that authorities believe was to be used for a human smuggling operation.

“The men were also in possession of a satellite phone, a fuel transfer pump, a GPS that was thrown overboard, large amounts of bottled water, a large array of apples and other produce, as well as two small fishing rods that were non-typical for saltwater fishing,” Linhardt said in a statement.

Despite the fishing rods, authorities found no tackle, bait or other fishing gear on the boat, Linhardt said.

The men, Giovanny Vigoda, 44, and Juan Miguel Rubio, 42, were booked into county jail Saturday around 4 p.m. on a charge each of illegally transporting gasoline. They were released on their own recognizance the next day, Linhardt said.

Two other agencies, the U.S. Border Patrol and Customs and Border Protection Air and Marine Operations also responded, Linhardt said, but it was not clear on Monday if Vigoda and Rubio face additional federal charges.

“Whatever federal charges may or not be pending would be up to federal authorities,” Linhardt said.