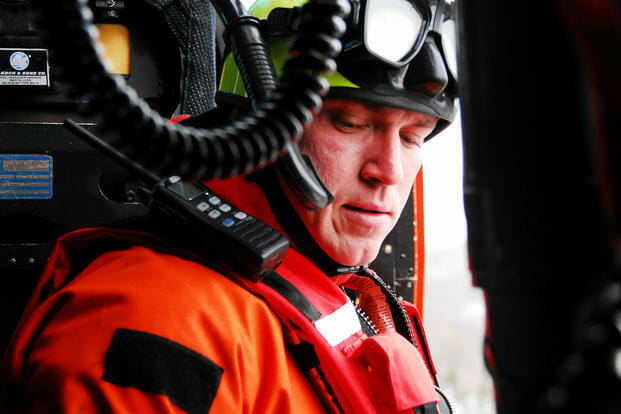 The crew of the 65-foot fishing vessel Theodora was disoriented, and the ship was taking on water fast. It was Feb. 11, 1983, and a record-breaking nor’easter was battering the East Coast, shutting down airports and tossing ships around like toys in a tub — except this tub had 50-foot waves and 55-mph winds.

The Marine Electric found the beleaguered ship approximately 55 miles southeast of Chincoteague, Virginia. Like a 605-foot-long seawall, the massive carrier protected the Theodora from the worst of the waves until Coast Guard rescue helicopters arrived. Using water pumps, the rescue team managed to save the Theodora and escort the ship back to safe harbor. At that point, the Coast Guard cleared the Marine Electric to continue its course to Somerset. However, with his ship having taken a beating in guard of the Theodora and now taking on water itself, the captain of the Marine Electric, Philip Corl, charted a new course for Newport, Rhode Island, a shorter journey as well as a safer location to wait out the blizzard.

But around 2 a.m. on Feb. 12, the bow of the Marine Electric remained dipped below the waves as it bobbed in the rollicking storm. Instead of rolling with the waves, the ship appeared to be plowing through them. It meant flooding in the forward compartments.

A compromised cargo hatch allowed ocean and stormwater to rush inside the bow, flooding the forward hold first and keeping it from staying above the storm swells. This allowed the seawater to reach the larger hatches farther aft, filling more cargo holds, weighing down and flooding the rest of the ship.

The first distress call from the Marine Electric came at 2:51 a.m. when Corl radioed the Coast Guard station in Ocean City, Maryland. “I’m approximately 30 miles from Delaware Bay entrance, and I’m going down by the head,” reported Corl. “I seem to be taking on water forward.”

By 3 a.m., the deck of the Marine Electric was submerged under 6 feet of water. An hour later, the ship listed 5 degrees to starboard, swinging its lifeboats out over the water. The Coast Guard estimated their rescue team’s arrival at Marine Electric’s position at 6:15 a.m., but the crew didn’t have that long, and other ships in the area were more than three hours away.

“I think I’m going to lose my ship here,” Corl said at 4:08 a.m. in one of his last transmissions. “We are starting to take a real bad list to starboard.”

At 4:14 a.m., Corl ordered his crew to abandon ship. It would be his last order.

“He was matter-of-fact,” third mate Eugene Kelly later recalled. “He wasn’t screeching into the microphone. It was just a statement.”

In a televised interview for Disasters at Sea that originally aired in 2018, Kelly recounted the chaos aboard the Marine Electric as it began to sink. He recalled that during the evacuation, he saw a stack of life rings lashed to the deck railing. No one could jump to the swinging lifeboats because of the ship’s severe list, so Kelly threw the life rings into the sea, hoping they might be found by crewmen lost in the waves.

The Marine Electric made a lurching roll, and Kelly looked up to see a smokestack falling directly toward him. But just as he was about to be crushed, the final heave of the dying ship thrust him overboard and into the frigid waters.

In the water, Kelly found five other crewmen clinging to one of the life rings he had thrown from the deck. All of them were wearing nothing but life vests and the clothes on their backs. They needed to be rescued fast; a few were already suffering from hypothermia.

The Coast Guard rescue helicopter arrived about an hour after the ship went down. The rescue crew found Kelly and the other men clinging to the life ring and one another, surrounded by debris, life jacket beacons, and bodies. The Coast Guard helicopter managed to rescue crewman Paul Dewey and Chief Mate Robert Cusick from separate lifeboats. Kelly was hoisted off the life ring. Ultimately, they were the only three men to survive the disaster.

Petty Officer 2nd Class James McCann, a Navy rescue swimmer, arrived on a Navy chopper shortly after the Coast Guard rescuers. He pulled five bodies from the water before getting hypothermia himself. In all, the rescue crews pulled 24 bodies from the sea that morning. According to a 2019 Maritime Executive article memorializing the disaster, seven crew members were never found. The article states: “It is likely the ship’s engineers were trapped belowdecks when the vessel capsized.” The ship and its cargo, once worth $12 million, rest forever in three pieces 120 feet below the ocean’s surface.

During the ensuing investigation, Cusick’s meticulously kept notes on the Marine Electric’s lack of seaworthiness revealed a troubling history of rushed ship inspections and neglected repairs. Cusick presented his notes to the committee from the Marine Board of Investigation and placed the blame squarely on the owners of the Marine Electric rather than its crewmen.

“[Cusick] had a list of shipyard jobs left undone because of budgetary cuts; the hatches on that ship were old, warped and cracked,” Kelly told interviewers. “Bob had drawings of hatches that needed to be repaired in his files at home.”

The Marine Electric tragedy changed the maritime industry forever. Although it was an awful end for 31 of its crew, its sinking prompted a series of sweeping regulatory changes that would help ensure that such a tragedy never occurred again.

Many regulatory rules are “written in blood,” as neglect, mistakes, and poor regulations are often discovered only because of a disaster resulting in a massive loss of life. The Marine Board of Investigation’s findings helped create stricter safety regulations and inspection standards for cargo ships.

As a secondary result, the Coast Guard stood up its rescue swimmer program, an effort spearheaded by Coast Guard Capt. Domenic Calicchio, one of the officers who investigated the Marine Electric disaster. The Coast Guard Aviation Survival Technician School — a grueling 24-week course — was established in 1985 and is now being taught in Petaluma, California, while the Coast Guard repairs its historic training facility in North Carolina.

Rescue swimmers save hundreds of lives every year. Stationed at Coast Guard air bases, the swimmers deploy on various missions under unpredictable circumstances. Swimmers are trained to swim in rough seas, rappel from unstable helicopters in high winds, respond to mass casualty disasters at sea, and perform lifesaving medical care under high-stress conditions.

Senior Chief Petty Officer Lewis Hart, a former commander of the Elizabeth City, North Carolina, training facility said in a 2008 Coast Guard article: “The addition of a rescue swimmer asset to helicopter search and rescue teams has had significant impact on the mission.” Hart cited the role of Coast Guard rescue swimmers in the response to Hurricane Katrina as a clear example of the value they provide. Rescue swimmers helped save over 3,000 people — overall, the Coast Guard rescued more than 33,000 — in the aftermath of the Category 5 hurricane that devastated New Orleans in 2005.

Lauren Coontz is a staff writer for Coffee or Die Magazine. Beaches are preferred, but Lauren calls the Rocky Mountains of Utah home. You can usually find her in an art museum, at an archaeology site, or checking out local nightlife like drag shows and cocktail bars (gin is key). A student of history, Lauren is an Army veteran who worked all over the world and loves to travel to see the old stuff the history books only give a sentence to. She likes medium roast coffee and sometimes, like a sinner, adds sweet cream to it.