After a Barrage of Editorials and Critiques, Marine Leaders Defend Restructuring Plan 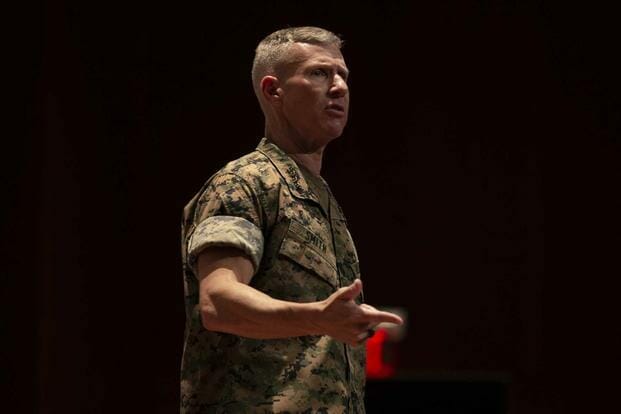 Marine Corps leaders have come out with a strong defense of their future vision for the service — known broadly as Force Design 2030 — after a string of editorials and pushback from former generals was published in several media outlets.

The plan, announced more than two years ago, has the Corps shedding its tanks, some aircraft and thousands of Marines to make way for anti-ship missile capabilities, as well as unmanned systems and other high-tech equipment, in an effort to refocus the service on amphibious and expeditionary warfare.

“Anybody that thinks that’s changed, you should go to Parris Island, or to MCRD [Marine Corps Recruit Depot] San Diego, or to Quantico,” he added.

The comments seemed aimed squarely at editorials criticizing the service’s revamp that have come out in the last few months.

Jim Webb, a medically retired Marine officer and former Navy secretary, called the plan “a policy that would alter so many time-honored contributions of the Marine Corps” in a recent Wall Street Journal editorial that claimed to represent the views of 22 four-star generals.

Webb has been a frequent critic of the plan, writing editorials going back to 2020 arguing it would “dramatically alter the entire force structure of the Marine Corps” to take on China while “ignoring the unpredictability of war itself.”

Other critics, such as author and former Marine infantry officer Bing West, argue that, by ditching tanks and artillery assets, the Corps will be less capable in urban battlefields like Ukraine. West pointed out that Marines were crucial in two major urban battles in recent memory — Hue City during the Vietnam War and Fallujah during the second war in Iraq.

However, Smith, in his remarks Tuesday, said he had a different takeaway from recent events in Ukraine.

“You really have to look no further than Ukraine to see … the value of an individual, one individual,” said Smith, who as a lieutenant general led the command that helped develop the redesign plan.

Lt. Gen. Karsten S. Heckl, the man who now leads that development command, argued that the conflict in the Middle East — which included the battle of Fallujah — was part of the problem for the Corps.

“For all the right reasons, they called, we went,” Heckl said. “But we kind of lost a sense of who we were.”

“Our stuff grew in both size and weight. … We were a little less concerned about being shipboard compatible,” Heckl explained, before adding that the conflicts cost Marines a different aspect of their ethos and culture — the maritime fighting force.

“Things started sneaking into our lexicon — no longer called chow halls, mess decks. They were DFACS,” hel said, using the Army term for a dining facility.

One of the elements of the plan is to make Marine units smaller and more nimble to allow them to move freely inside the enemy’s territory and make decisive strikes.

And Heckl said that the high-tech gear that the new regiments are expected to field is developing apace.

“I’m not talking fairy dust and unicorns and pixies. This is stuff we’re doing now,” he said, before noting that he now has a piece of drone debris courtesy of one of the new weapons systems.

Retired Marine Lt. Gen. Paul Van Riper, who spent 41 years in uniform, charged in a Marine Corps Times editorial that the changes mean the service will become “a mere shadow of what was once a feared fighting force.”

But the leaders on the panel were especially adamant about one thing: The plan does not mean a less lethal Marine Corps.

“Someone has to take more risk for the joint force,” Smith said. “This is what we do; it’s our nature.”

Sergeant Major of the Marine Corps Troy Black declared, “We locate, we close with, and we destroy the enemy. Period.

“We have people, and we’re ready to do that across the continuum of time,” he added.