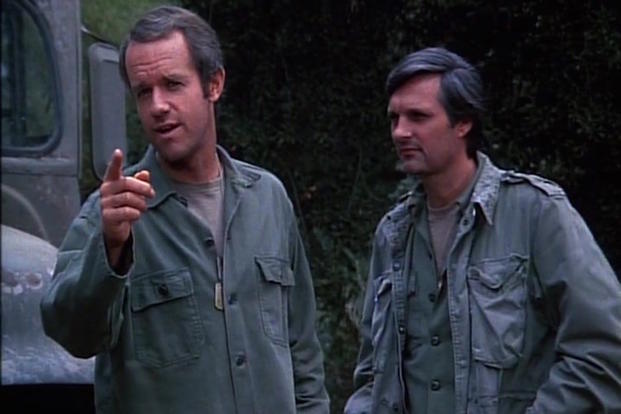 CBS aired the first episode of “M*A*S*H” on Sept. 17, 1972. Based on the Oscar-winning 1970 movie directed by Army Air Forces World War II veteran Robert Altman, the series softened the hard-edged satire and became one of the most popular television series of all time.

That September 1972 premiere was just 19 years after the July 27,1953, armistice that ended the conflict in Korea. The Vietnam War still raged as the People’s Army of Vietnam (PAVN) was in the midst of a series of attacks in the Quảng Ngãi province that week.

“M*A*S*H” struggled to find an audience during its first season but became a hit in the fall of 1973 after CBS gave it the Saturday time slot following “All in the Family,” the No. 1 show on television. “M*A*S*H” remained one of the most successful shows on television until it ended in February 1983.

Army veteran Alan Alda starred as Capt. Benjamin Franklin “Hawkeye” Pierce for the entire 11-season run of the series. He received a staggering 25 Emmy nominations for the show and won five awards, including three for playing Hawkeye, one for writing and another for directing the show.

Marine Corps veteran Mike Farrell joined the series in season four as Capt. B.J. Hunnicutt and stuck around until the end. He got a pair of Emmy nominations while working on the show, one as Best Supporting Actor and another for writing.

To celebrate the 50th anniversary of, Alda and Farrell got together for a toast and Alda shared a photo on Twitter.

Alda is 86 years old and Farrell is 83, and the photo suggests that they’re both enjoying good health. Here’s to seeing them again for the next “M*A*S*H” milestone.