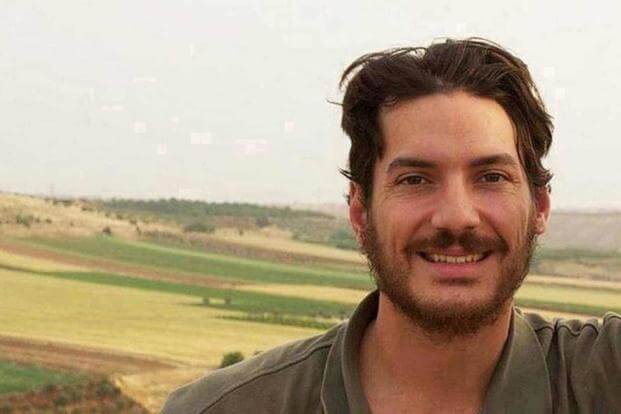 WASHINGTON — President Joe Biden met with the parents of Austin Tice, an American journalist who went missing in Syria in 2012, at the White House on Monday after journalists encouraged him over the weekend to prioritize Tice’s case.

“The president reiterated his commitment to continue to work through all available avenues to secure Austin’s long overdue return to his family,” Psaki said in a statement, and “further emphasized that his administration will work relentlessly until Austin and other Americans held hostage and wrongfully detained worldwide are safely at home with their loved ones.”

“Today’s meeting built on multiple meetings and conversations between the Tice family and the president’s national security team,” she added, “which will remain in regular contact with the Tices and other families of Americans held hostage or wrongfully detained abroad.”

Both Biden and Tice’s mother, Debra, attended the annual dinner of the White House Correspondents’ Association on Saturday where Tice’s story was told. Biden said over the weekend that he hoped to meet with the Tices, prompting his aides to set up the meeting, Psaki said.

A Texas native and former officer of the U.S. Marine Corps, Tice was 31 when he traveled to Syria in 2012 as a freelance journalist for McClatchy, The Washington Post and CBS News.

He was detained at a checkpoint in a suburb of Damascus. Five weeks later, a video was released showing him held by unidentified armed men. No one has claimed responsibility for his disappearance.

Debra and Marc Tice, Austin’s father, have since pushed three presidents to identify his whereabouts and secure his release.

“I wonder if he’s allowed himself to forget about Austin,” she told reporters. “I don’t have any indication otherwise.”

She later met with Biden’s national security adviser, Jake Sullivan, who assured her that Tice’s case is a top priority for the administration.

The United States does not recognize the government of Syrian President Bashar Assad, and the Biden administration will not say whether it is willing to engage with it directly to secure Tice’s freedom.

But the administration has made a push to free Americans unjustly detained abroad in recent months, granting its special envoy for hostage affairs, Roger Carstens, the freedom to engage with hostile foreign governments, such as the regime of Nicolás Maduro in Venezuela.

“We have an entire apparatus and effort through the interagency to work to do everything we can to engage with leaders, with countries, even some we certainly do not have diplomatic relations with, to bring Americans home,” Psaki said.

While the Assad government has never acknowledged Tice’s capture, the Biden administration is working towards his release on the belief that he is alive.

Officials from the Trump administration made a push for Tice’s release in 2020, meeting with Syrian officials to discuss potential terms for his release.

Debra and Marc Tice did not immediately respond to requests for comment.

© Copyright 2022 McClatchy Washington Bureau. All rights reserved. This material may not be published, broadcast, rewritten or redistributed.