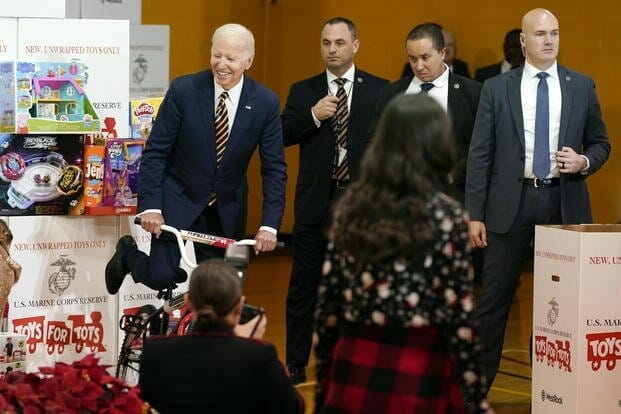 The event at Joint Base Myer-Henderson Hall in northern Virginia is part of Jill Biden’s Joining Forces initiative, which offers support and resources to families of military members and veterans, as well as their caregivers and survivors. Helping the first couple sort through presents were spouses of Pentagon leaders and local children of servicemembers.

“Military kids like you give our country so much,” Jill Biden said, after a young child read a passage from the Dr. Seuss classic “How the Grinch Stole Christmas.”

She added: “You support your parents through moves and deployments and you sometimes help take care of the family members who came home with maybe illnesses or injuries. And you help out neighbors when they need it, just like you’re going to do today.”

Through the U.S. Marine Corps Reserve Toys for Tots Program, Marines and volunteers have sent out 627 million toys to more than 281 million children since 1947, according to the White House. Joe Biden noted that last year, the initiative collected 22 million toys for 8 million children, “giving Santa a run for his money.”

“But unlike Santa, you don’t wear big red suits, you don’t travel the world in just one night. Instead, you wear dress blues and army greens,” the president continued. “You stand watch around the world every single night.”

He then had a message for servicemembers and their families: “You aren’t just the heart and soul of our nation, you’re the very spine of our nation. And we owe you.”