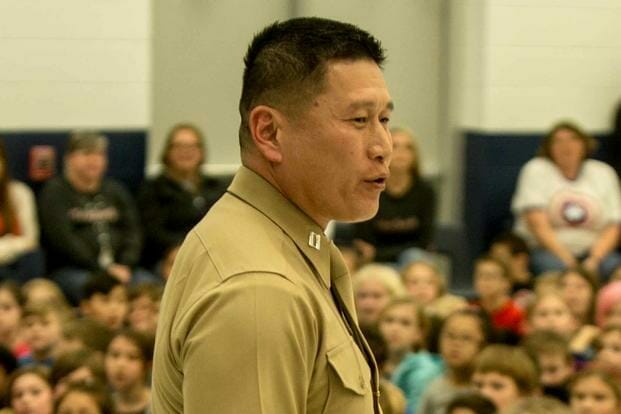 After the State Department announced that a third American is missing in Ukraine, family members identified the person to Military.com as Marine veteran Grady Kurpasi.

Kurpasi, whose wife confirmed he is missing in Ukraine, is a 20-year Marine Corps veteran with a storied service record.

He enlisted just two months after Sept. 11, 2001, and deployed to Iraq three times, according to details of his service provided by the Marine Corps. He earned a Combat Action Ribbon and a Purple Heart, as well as several Navy and Marine Corps Achievement and Commendation medals. Eventually, Kurpasi was selected to become an infantry officer, making captain in 2015. He retired from the Corps in November 2021.

Read Next: The Long and Uncertain Path Ahead for Veterans Waging War Against Lingering COVID

State Department spokesman Ned Price said that Kurpasi “had traveled to Ukraine to take up arms … in recent weeks” but noted that, “unfortunately, we don’t know the full details of that case.”

CNN, which first confirmed Kurpasi’s identity, reported that a family friend said the retired Marine officer “wanted to go and help the Ukrainian people. He wasn’t really planning on fighting.”

The news of the missing Marine officer comes on the heels of two other military veterans reported missing and feared captured by Russians last week. Alexander Drueke, a 39-year-old Army veteran who served as a “chemical operations specialist” and left the service as a staff sergeant, and Andy Huynh, a 27-year-old “engineer equipment operator” and former corporal in the Marines, traveled to Ukraine about two months after Russia’s initial invasion. The Army and Marine Corps provided the service history of both veterans to Military.com.

Asked about the three missing men on Friday, President Joe Biden told reporters that he’s been briefed but didn’t know where they were, before forcefully noting that “Americans should not be going to Ukraine.”

Meanwhile, Price said Thursday that the State Department hasn’t “seen anything from the Russians indicating that two such individuals are in their custody,” alluding to Drueke and Huynh.

“We have not raised this yet with the Russian Federation,” Price said Thursday. “If we feel that such outreach … would be productive in terms of finding out more information on the whereabouts of these individuals, we won’t hesitate to do that.”