Head of US Marines Vows to Bolster Defense in Southern Japan 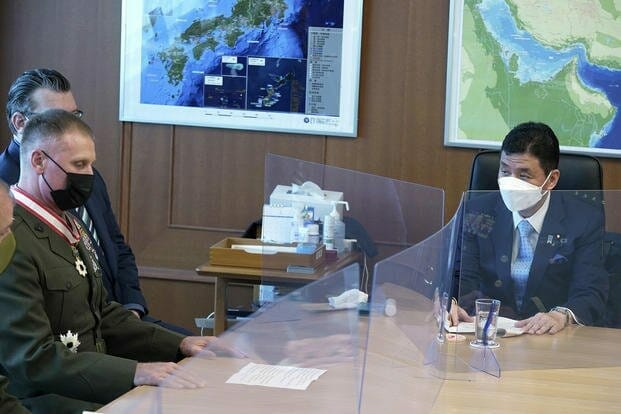 TOKYO — The head of the U.S. Marine Corps said Friday that his forces are committed to defending southwestern Japanese islands as the allies try to bolster their defenses amid growing threats from China and Russia.

Lt. Gen. Steven Rudder said at the beginning of talks with Japanese Defense Minister Nibuo Kishi that the U.S. Marine presence is focused on the so-called first island chain in the western Pacific — the string of islands stretching from Japan’s East China Sea islands through the Philippines that has traditionally defined a boundary of China’s sphere of influence but that Beijing now appears to be pushing eastward.

“With our forces west of the international dateline, we will continue to live, train, and work in the first island chain primarily with the assistance and support of our Japanese host,” Rudder said. The United States and Japan are looking to develop capabilities and tactics to ensure readiness in the region, he said.

His comments come on the heels of China’s and Russia’s increased naval activity around Japan.

The Defense Ministry said it spotted a fleet of seven Russian warships Thursday off the southern coast of Chiba heading southwest. The ministry also found several Chinese intelligence ships near the Tsugaru Strait in northern Japan, just days after they were seen in waters off southern Japan.

After a decade of steady increases in military spending, Japan has pledged to further bolster its military readiness over the next five years and is working on a revision to its security strategy in the face of threats from China, North Korea and Russia.