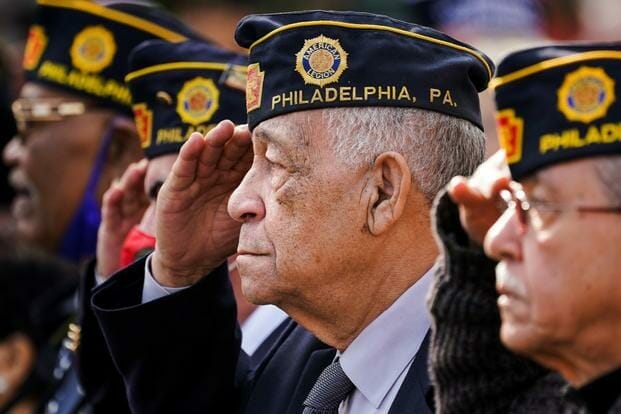 SCOTTBORO, Ala. (AP) — Finally, Thomas Fagan was in for a surprise visit from one of his best friends, Donald Goeppner. The two met while serving in the Marines during the Korean War, and their reunion was 69 years in the making.

“It was like ‘finally,’ we’re seeing each other after all these years. It’s an emotional event,” Goeppner said. “It’s a good feeling …. I’m just proud that we got together.”

The last time Thomas Fagan and Donald Goeppner saw each other, they were saying their goodbyes after serving in Korea in 1953. Despite signing up to fight the war, they had to find ways to try to get there.

Originally being trained as riflemen, they were sent to Hawaii as guard Marines, a post that neither man saw fit.

“We were gung-ho Marines, we signed up to fight in Korea, not be guard Marines,” Goeppner said.

Goeppner and Fagan hatched a plan: they stowed away on a merchant ship in the hopes that they would get to Korea and be stationed once they arrived. After stowing away on the life boats for three days with no food or water, they climbed on the boat, to which the merchants fed them, gave them some IV’s to rehydrate them and dropped them off at Yokosuka, Japan.

“After we got off the boat in Japan, these merchant marines that were on the ship, they all loved us, they wished us gung-ho and everything,” Goeppner said.

Fagan and Goeppner were promptly thrown in the brig in Yokosuka before being sent back to Pearl Harbor and thrown in the brig for 10 more days. After they got out, the colonel of the base gave them the order: they were going back to Korea. From there, they served in Dog Company, 2nd Battalion, 1st Marines as riflemen.

“It was a hell hole but that’s what we wanted, we were prepared for it,” Goeppner said.

Despite living in caves and enduring temperatures of 38 degrees below zero, by the time their time in the war had ended, both men were private first class.

“We weren’t good for promotion, we were gung-ho Marines but not what they called spick and span,” Goeppner said.

After getting out of the Marines, both men went back to their homes, Goeppner in Chicago, Fagan in New Jersey. Goeppner would work as a fireman in Chicago for 40 years and raise six children while Fagan worked as a boilermaker and a little time as a bus driver for Greyhound, raising five children. When Fagan first got back home, he learned that he had gotten drafted to serve in the war he just left.

“I had to show them the paperwork that I was over there,” Fagan said.

Now, 69 years later, the opportunity finally presented itself for the two veterans to see each other face to face for at least one more time. After delays, Goeppner and his son arrived from Chicago for a visit at Fagan’s house in Scottsboro recently.

When Fagan first saw Goeppner, he didn’t recognize him until he spoke.

“There’s only one Goepp,” Fagan said.

From there, both men hugged, sat down and started catching up with each other, enjoying having a conversation without the need for a phone or a postcard.

“It made my heart so glad because he wanted to see him for so many years now and it just never happened. For them to see each other, it’s my privilege and makes me so happy for Tom that he got to see his marine corps buddy again,” Rita Fagan said.