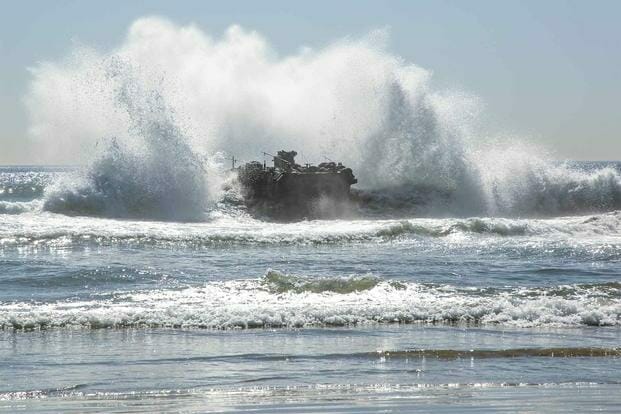 The Marine Corps lifted a freeze on water-based training for its new landing craft a week after two of its vehicles became disabled in the surf off the California coast.

On July 19, two Amphibious Combat Vehicles (ACVs] got caught in the high surf at Camp Pendleton, disabling both and tipping one on its side. The Marine Corps emphasized that no one was injured in the incident and both vehicles were recovered by July 21, but the service put a halt on letting Marines train with the vehicles in the water.

Read Next: Air Force Moves F-22s to Poland in Bid to Protect Allies Against Russia

Lt. Noah Richardson, a spokesman for the 1st Marine Division, also confirmed that the troops who were taking part in the exercise when the ACVs got stranded were from 1st Battalion, 4th Marines — the same unit that lost eight Marines in 2020 when an amphibious assault vehicle, or AAV, the ACV’s predecessor, took on water and sank. Meanwhile, the ACVs came from the 3rd Assault Amphibian Battalion — the same unit that supplied the AAVs two years ago.

Four subsequent investigations by both the Marine Corps and the Navy found that the sinking was “preventable” and cited, among other things, poorly maintained vehicles and inadequate training.

Critics said that this latest incident raises concerns that the Marines have learned little since the deadly sinking.

Michael McDowell, a fellow at a Washington, D.C., think tank and military safety advocate, told Military.com that he has serious questions about the Corps’ commitment to safety after the beaching.

McDowell’s son, 1st Lt. H. Conor McDowell, 24, was killed in a rollover at Camp Pendleton on May 9, 2019. Since then, McDowell has advocated and lobbied for more safety during vehicle training and greater accountability for leaders following incidents.

McDowell wants to know why the unit chose to go into the water despite the dangerous weather forecast. The National Weather Service had issued a high-surf advisory for both San Diego and Orange counties at the time of the incident — an area that includes Camp Pendleton and its 16-mile Pacific Ocean shoreline.

“Why was utmost caution not exercised?” McDowell said. “Aren’t we supposed to learn lessons from that previous painful experience?”

Richardson, however, when asked about the comparison, pointed out that the incidents involve two different vehicles. The AAV that was involved in the 2020 incident was a Vietnam-era craft that was built 17 years before the youngest Marine who perished inside it was born. Since that incident, the vehicles are no longer allowed in the water. The ACVs have been in service only since 2020.

The service also noted that, since the sinking of the AAV in 2020, ACV units had to complete 18 tasks that focused on safety measures, evacuation training, and water survival qualifications before they could get back in the water.

Also, while the units involved are the same, the Marines noted that the battalion commanders for both are now different. Both commanders in charge at the time of the 2020 incident received reprimands. Lt. Col. Michael J. Regner, commanding officer of Battalion Landing Team for the 1/4, was removed from his job in October 2020. Lt. Col. Keith Brenize, the commander of the 3rd Assault Amphibian Battalion, is now at the Marine Corps Command and Staff College. He was censured by Navy Secretary Carlos Del Toro in June of this year for failing to properly train the Marines under his charge.

The Corps also fired Maj. Gen. Robert Castellvi last June as the service’s inspector general, effectively ending his career. Castellvi was the commanding general of the California-based 1st Marine Division at the time of the deadly mishap and oversaw both battalions.

McDowell, however, is less convinced that the lesson has sunk in. “Safety should be Job 1 for leaders, especially after a second serious ‘mishap,'” he argued.

Last week, Lt. Gen. David Furness, the deputy commandant of the Marine Corps for Plans, Policies and Operations, said that the service is investigating this latest incident in an effort to “learn from this event, and ensure our assault amphibian community remains ready to support our nation.”

“This is the right thing to do,” Furness added in the emailed statement to Military.com.

Related: Marine Corps Grounds Its New Landing Craft After 2 Are Disabled in Big Waves During Exercise