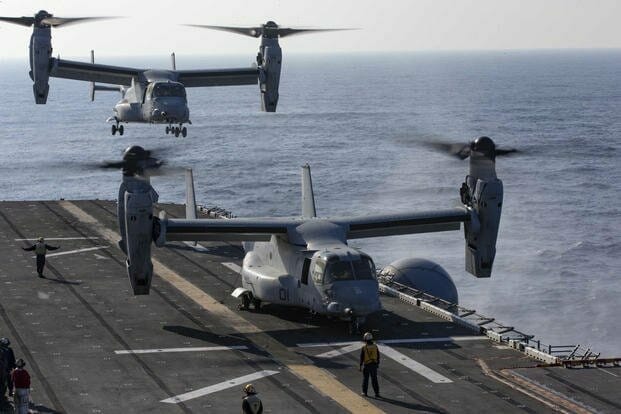 The Marine Corps says it will not be grounding its fleet of MV-22B Osprey aircraft less than a day after the Air Force announced an indefinite halt, citing safety issues with the airplane’s clutch.

The Corps said that it’s known about the problem since 2010 and its pilots can handle it, with one service official calling the issues “common knowledge.”

“Hard clutch issue has been known to the Marine Corps since 2010, and as such, we have trained our pilots to react with the appropriate emergency control measures should the issue arise during flight,” Maj. Jim Stenger, a spokesman for the branch, said in a press statement released Thursday.

Although the Osprey is fielded by the Marines, Navy and Air Force, the Corps has logged an overwhelming majority of all the military flight hours for the aircraft — 533,000 out of a total of 680,000.

Stenger, in his statement, noted that, in all those flight hours, there has not been “a single catastrophic event contributed to this hazard.”

An official with U.S. Air Force Special Operations Command, the group that operates the Air Force’s Ospreys and announced that service’s grounding of the aircraft Wednesday, described the issue as a slip in one engine’s clutch, “which causes the engine [system] to transfer all the power into one of the [two] engines to keep the Osprey in the air.”

“When the pilot grabs the throttle of the Osprey, the imbalance is creating too much torque on the aircraft,” the official added.

A Marine Corps official who spoke with reporters on the condition of anonymity explained that only 15 mishaps involving the “hard clutch issue” have occurred in the military since the start of the program, with 10 involving Marine Corps aircraft. “It is common knowledge with the fleet,” they added.

“In every incident, the aircraft landed safely and there were no injuries as a result of the failure,” the official explained.

The official said that “over two-thirds of these occurrences have happened within seconds after takeoff,” adding that the Corps has long had procedures in place for its pilots.

“Simply by doing hover checks significantly reduces the exposure to this incident,” the official explained, referring to a procedure of hovering roughly 30 feet off the ground while looking over the aircraft’s instruments.

Marine Corps officials said that they have shared their knowledge about how to handle the issue with both the Navy and the Air Force as incidents occurred “via various formal and informal methods of communication regularly.”

Military.com reached out to the Air Force to ask why it chose to stand down its aircraft in light of the existing information from the Marine Corps but did not receive a reply in time for publication.

The Marine Corps, in a fact sheet released Thursday, noted “the USAF employs the V-22 platform differently than the Marine Corps.”

Military.com also asked the Air Force why its statement suggested the issue had existed only since 2017 — not 2010 as the Marines said — but did not receive a reply.

The Navy, which also uses the Osprey aboard its aircraft carriers, said through a spokesman yesterday that it will continue to operate its version as well, but added that it was “aware of the issues effecting [sic] the U.S. Air Force CV-22 fleet and are closely monitoring our CMV-22 aircraft for similar occurrences.”

The Marine Corps official said that no Navy aircraft has experienced the clutch issue.

Although the Marine Corps stressed that there have been no injuries or deaths as a result of the clutch issue, it’s clear that it has been costly. The Marine official explained that each of the 15 incidents necessitated either replacing an Osprey’s gearbox, engine or both, depending “on the nature of the failure.”

Despite continuing to operate their Ospreys, Marine Corps officials said the service will still try to sort out a longer-term solution.

“We’re going to reinforce our takeoff maneuvers — to alert the aircrew to just reinforce checking the gauges because, very quickly, you’ll get indication in the cockpit, if this occurs,” the Marine Corps official explained.