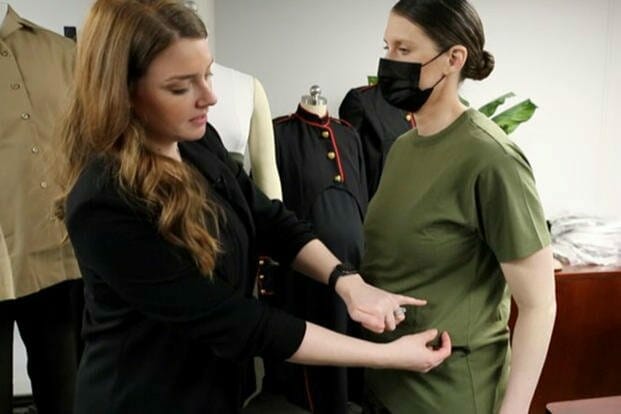 The Marine Corps announced Monday that it has launched a new pilot program that aims to loan officers in the service maternity uniforms for free.

Marine officers who are serving within 100 miles of Quantico, Virginia, are now able to get a one-time issue of utility and service dress maternity uniforms for free between now and March 2026.

The Marines have historically been the least gender-integrated service. According to an analysis by the Council on Foreign Relations, in 2020 only 8% of Marine officers were women compared to 21% in the Air Force and 19% in both the Army and Navy.

Eligible Marines will get the combat utility uniform with three blouses or trousers, a green tunic, four service blouses (two short and two long sleeve) as well as components for the Marine service uniform as well. The program’s website notes that the blue dress skirts and slacks “are experiencing a delayed delivery due to COVID-19 and supply chain issues” and that they won’t be available until next year.

One of the program’s goals is to use the Marines who participate to offer feedback on the uniforms’ fit and longevity. However, the program is just the latest in a series of moves across the military to address the concerns of pregnant and nursing women over their uniforms.

The program could also help address concerns over a “pink tax”– the higher costs borne by female service members for uniforms over their male counterparts. In October, a bipartisan pair of senators introduced a bill to help address the issue. The legislation came on the heels of a government watchdog report that showed the disparity could be as large as $8,000 between men and women over a full career.

Last spring, the Marine Corps announced it would start releasing more functional and better fitting maternity and nursing undershirts and service uniform blouses. Meanwhile, the Navy rolled out maternity flight suits last summer and a program similar to this one in December, 2021. Late in 2020, the Army said it would look at updating its own 40-year-old smock maternity uniform.

This program is one result of a maternity uniform loan program that was signed into law in January, 2021 as part of the National Defense Authorization Act (NDAA) that year. The law let each service establish an office where women can turn in items that are no longer needed for refurbishment and reissue to other expectant mothers. Lawmakers said that one of the goals of this larger program is to study whether having the right uniforms readily available allows women to do their jobs more effectively while pregnant.

The NDAA required each service to issue a report on its findings by 2025.

Marines who are able to get a maternity uniform through this program will have up to six months after their pregnancy to return the issued items.