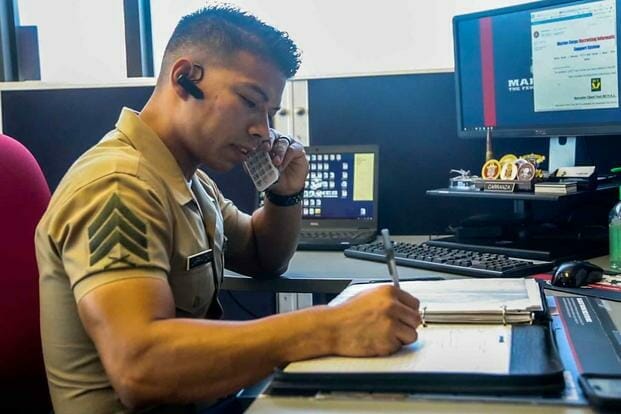 The Marine Corps has rolled out larger cash bonuses aimed at encouraging recruiters to stay at their duty stations for months longer as the service heads into another challenging recruiting year.

According to a message released Tuesday, canvassing recruiters and the staff noncommissioned officers in charge of recruiting substations will receive more bonus pay if they extend their standard three-year tours for six, nine or 12 months.

As a result, a recruiter who extends for a year would start to get $1,125 a month in bonus pay while, on the short end of six months, a Marine would receive an extra $875 a month after they start their extra time, the message explained. While on their first three years of recruiting duty, Marines receive $375 a month in incentive pay.

Read Next: The Army Forced to Change the Name of Its New Rifle

This new bonus pay comes with one major caveat, however: Marines must meet the recruiting requirements set by the station commander or lose the extra cash.

The Corps, like every other branch in the military, has had a tough time getting recruits to sign up. Last year, the service made its enlisted recruiting goal by just eight Marines and its reserve target exactly. One way it managed to squeak by, though, was by dipping into its pool of delayed-entry applicants — something the Navy did as well. As a result, this year there is less of a reserve of recruits simply waiting to ship out, and the targets will be harder to meet.

There hasn’t been a single root cause for the recent recruiting challenge the services have faced, but leaders in the military have pointed to everything from a strong job market and greater competition from civilian employers to the vaccine mandate to a dwindling pool of eligible recruits.

Navy leaders have recently made a show of appealing to adults who are able to influence the coveted 18- to 24-year-old demographic. Adm. Mike Gilday, the Navy’s top officer, said while speaking to a crowd at the annual Surface Navy Association conference last week in Arlington, Va., that “mothers and fathers, aunts and uncles, grandparents, teachers, school administrators” need to see a positive side of the Navy.

More broadly, the Marines have been looking at various new ways to bolster recruitment of not just young, relatively untrained people but also more skilled, older Americans as part of that service’s grand redesign, known as “Force Design 2030,” which aims to make Marine units more flexible and independent to better set them up for campaigns like island-hopping in the Pacific.