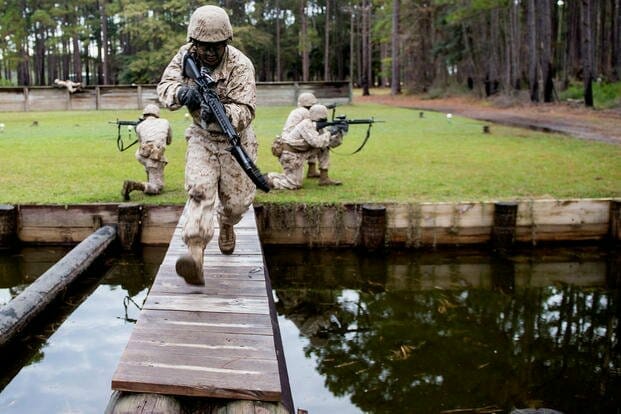 A Marine drill instructor at Marine Corps Recruit Depot Parris Island, South Carolina, has been charged for his role in the death of Pfc. Dalton Beals, 19, on June 4, 2021.

Maj. Philip Kulczewski, a spokesman for Parris Island, confirmed that Staff Sgt. Steven Smiley will face six charges, including negligent homicide, cruelty or maltreatment of subordinates, and obstruction of justice, which were referred to a general court-martial on Nov. 10 by Brig. Gen. Walker Field, the commanding general at the base.

Beals died during the 54-hour, capstone Crucible event of Marine Corps boot camp while being supervised by Smiley, according to a copy of the command investigation obtained by Military.com. The investigation noted that the recruit died of hyperthermia on a day when conditions got so hot that Marine Corps protocol calls for a halt in training. The report said Beals’ “tragic death was likely avoidable.”

Read Next: The Army’s Little-Known Boat Fleet Is Getting a Big Upgrade

The command investigation into the incident revealed that Smiley, while “technically qualified to serve as a senior drill instructor … did not have the maturity, temperament, and leadership skills.” The document, dated September 2021, also notes that recruits struggled under his leadership.

The Island Packet and Task & Purpose were first to report this story.

It was not immediately clear whether Smiley is represented by an attorney.

Discussing the day of Beals’ death, recruits in his group told investigators that the heat had been a problem and that they were “cooking in the sun” while being told to clean their rifles or drink water. As the recruits marched for miles wearing Kevlar helmets and black leather gloves, they began to fall out of formation.

By 10:45 a.m., temperatures had climbed beyond 90 degrees and the base set “black flag” conditions, meaning that “physical training and strenuous exercise [were] suspended for all personnel.”

The investigation notes that, at some point in the day, Beals started to lean over and slow down “like he was falling asleep.” Once the recruits reached Page Field, a former airstrip on the base, “everyone noticed Recruit Beals was ‘out of it.'” After another recruit had a medical emergency, his team did a head count and discovered Beals missing, setting off a partial search.

Eventually, Beals was found unconscious and without a pulse. Marines performed CPR on him until medical personnel arrived and used an automated external defibrillator. He was pronounced dead at 5:41 p.m. — just under 30 minutes after Marines dialed 911.

The report notes that one of the medical responders said that “‘Beals had ‘rigors’ and Recruit Beals had been dead for over an hour.”

The report cited Marines who described the weather as “hot as hell” and “its own event” on the Crucible. Another recruit who needed medical attention for a heat injury that day had a body temperature of 107.1 degrees.

While the report and charges largely target Smiley in placing blame for Beals’ death, the investigation also noted that there were “leadership failures” throughout the company and that warning flags, like the recruit surveys, were inadequately addressed by more senior Marines.

The report ultimately recommended punitive or administrative actions be taken against three Marines, including Smiley.

Kulczewski said that trial dates and other milestones for Smiley have yet to be determined.