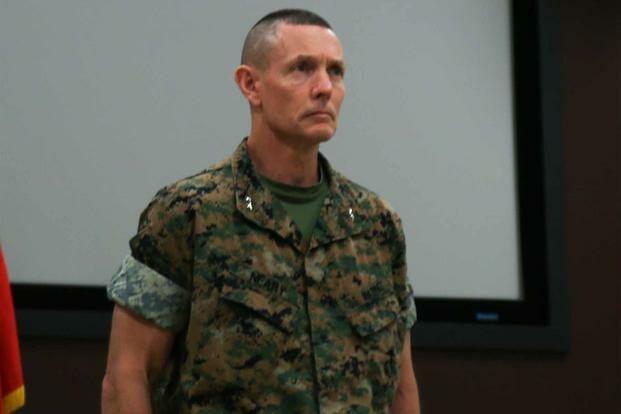 A released investigation report has shed more light on a 2020 incident that saw a two-star Marine Corps general relieved of his command overseeing Marine forces in Europe and Africa.

Maj. Gen. Stephen M. Neary was relieved in October 2020 after Marines alleged he used what a report from investigators would categorize as the “full N-word” after overhearing some service members listening to rap music in his headquarters in Stuttgart, Germany. Stars and Stripes was the first outlet to report the allegations.

Now, the report from the Inspector General of the Marine Corps, released to Military.com after a Freedom of Information request, reveals exactly what the Marines alleged Neary told them.

According to investigators, on the morning of July 22, 2020, Neary was on Devil Dog Field across from the Marine headquarters building when he heard eight Marines listening to the song “Put It On” by the artist “Big L.” Neary told the Marine nearest him to change the song. After the group finished their workout, Neary walked over to the Marines for a more detailed talk.

What was said during this more detailed talk is the subject of disagreement between the Marines and Neary, but it’s this conversation that would lead to his ouster.

According to that Marine, Neary went on to tell the group that “it’s your generation that’s burning buildings down and starting these protests” — just months after the murder of George Floyd at the hands of a Minneapolis police officer.

“He also said, ‘go ahead and call HR, I am the head of HR,'” the Marine’s account alleged.

These allegations were backed up by four other Marines interviewed by investigators. The report notes that each Marine’s account of the general’s comments included the allegation that “Neary used a racial slur two times, used the phrase ‘you people’ in a manner that offended them, and made reference to being the head of ‘HR.'”

Neary’s main argument was that “although he did utter a racial slur when speaking to subordinates, he did so for clarity and to denounce its use.” He also “admitted saying the racial slur one time but denied repeating it more than once,” the report said.

“Neary also denied using the phrase ‘you people'” or “saying anything to the Marines about ‘HR’ or being the head of ‘HR'” to investigators, the report added. However, in the days after the incident, the report notes Neary told an official whose name is redacted in the released document that “he probably said something like that” when asked about the “you people” remark but noted that “he was referring to the youth or the young people out in the streets rioting.”

Investigators said all five Marines who were there for the talk and provided testimony “expressed disbelief” that Neary chose to utter the full word instead of saying the phrase “n-word.” Two said they tuned out the general after he said it, and several Marines said they lost respect for him after the incident.

In the days after the exchange, Neary held a meeting with his noncommissioned officers in which he read a prepared statement and tried to answer questions. Investigators found that, while Neary apologized, “he did not admit that his use of a racial slur was wrong but, rather, defended his use by saying it was acceptable as a ‘teaching moment.'”

The report notes that several Marines who went to this meeting said they believed Neary’s apology “was not sincere and they saw it as more of a ‘cover your butt’ action.”

The inspector general ultimately found that Neary violated the “requirement of exemplary conduct” that was expected of him — though the report notes the general himself disagreed.

Neary “criticized the quality of the investigation and the report;” “highlighted what he described as ‘factual inaccuracies’ in the report,” and alleged conflicts of interest from officials and investigators.

Military.com asked the Marine Corps about Neary’s current status and assignment but did not immediately receive a reply.

On Nov. 3, 2020, Maj. Gen. Michael Langley took over as commander of Marine Forces Europe and Africa, the post held by Neary until weeks prior. On May 6, 2021, Maj. Gen. Tracy King took over the position in a change of command ceremony.