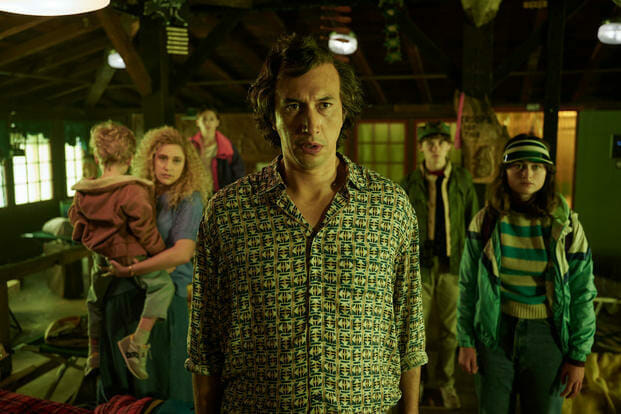 Marine Corps veteran Adam Driver stars in “White Noise,” a movie that finally brings Don Delillo’s influential 1985 novel to the screen after nearly four decades of failed attempts. The film will premiere at the Venice Film Festival in August and the New York Film Festival in October before streaming on Netflix later this fall.

Driver again works with writer and director Noah Baumbach after their huge success with the 2019 movie “Marriage Story.” That film was nominated for six Oscars, including Best Picture. Laura Dern won for Best Supporting Actress, while Driver was nominated for Best Actor and Baumbach for Best Original Screenplay.

“White Noise” tells the story of Jack Gladney (Driver), a professor of Hitler Studies at a small liberal arts college somewhere in the Midwest. Both Jack and his fifth wife, Babette (Greta Gerwig), have an irrational fear of death.

Netflix has released a trailer for “White Noise.”

Things get focused when there’s an airborne toxic event after a massive chemical spill. The threat of death is no longer abstract, and Gladney must work out how to cope with the reality instead of just the idea. The novel is a black comedy, much funnier than that plot description would suggest.

Alternative rock fans may have just realized that The Airborne Toxic Event, best known for the songs “Sometime Around Midnight” and “All I Ever Wanted,” was named after the novel. Delillo’s work has also influenced big-name novelists like David Foster Wallace (“Infinite Jest”), Jonathan Franzen (“The Corrections”) and Jonathan Lethem (“Motherless Brooklyn”).

Related: 10 Marine Corps Veterans Who Made It Big in the Movies

Driver, who broke through in Hollywood when he played Kylo Ren in the most recent series of “Star Wars” movies, continues to make risky and interesting choices in his acting career. He starred in a pair of Ridley Scott movies in 2020, the medieval action movie “The Last Duel” and the epic family drama “House of Gucci.”

He’s currently filming “Ferrari,” in which he plays legendary car designer Enzo Ferrari for director Michael Mann and will follow that with “Megalopolis,” an all-star production from director Francis Ford Coppola.