Marine Veteran Is the Latest Arrest as Jan. 6 Prosecutions Continue 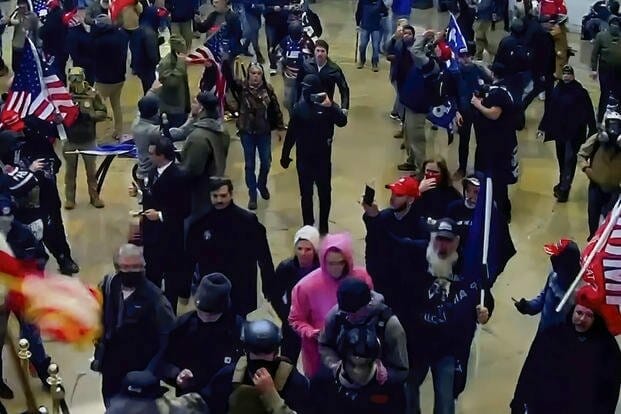 A Marine Corps veteran and former combat videographer was arrested Tuesday by federal officials in Alabama on eight charges stemming from his alleged actions at the U.S. Capitol Building on Jan. 6, 2021.

The Department of Justice announced that Kaleb Dillard, 26, had been taken into custody in Columbiana, Alabama, on felony offenses of assaulting law enforcement officers and interfering with law enforcement during a civil disorder, as well as six related misdemeanor charges. Dillard made his initial appearance Tuesday in the Northern District of Alabama federal court, according to the statement.

According to court documents, Dillard once served in the military. One way he was identified by investigators was with a photo from the Military Defense Personal Property System. They also said FBI agents “reviewed Dillard’s military records.”

Images of Dillard are also readily available in the Department of Defense’s media repository — DVIDS.

In those images, Dillard is identified as a combat videographer, with work on DVIDS going back as far as 2015. The caption on the last image of him on DVIDS, taken in May 2019, describes him as a sergeant assigned to the Communication Strategy and Operations office at Quantico, Virginia.

An Instagram account linked to Dillard, cited by investigators in court filings, shows a June 2019 image of him wearing a Marine uniform with the rank of sergeant, among many other photos of him in uniform.

Military.com reached out to the Marine Corps seeking a full service record for Dillard but did not hear back in time for publication.

According to the court documents released by the Justice Department, investigators were tipped off to Dillard’s identity by two informants — friends of his from “a religious organization in Virginia” — who identified him as having been at the Capitol on the day of the siege from publicly available footage of the day’s events and his own Instagram posts.

Federal officials, relying partly on testimony from a Capitol Hill police officer, say Dillard was part of the crowd that pushed its way into the building through the Rotunda doors. The court documents allege that the former Marine assaulted an officer in the process.

“Officer B.A. stated he was attempting to secure the Rotunda doors when he was approached from behind and thrown to the ground,” the document reads. “Investigators have identified this individual as Dillard.”

Citing a still image taken from security camera footage, investigators allege that Dillard then pushed a second officer, who was trying to close the Rotunda doors, in the chest. That officer later told investigators that Dillard came up to him yelling, “among other things, that he had been in the military prior to this date.”

Security camera footage captured Dillard throughout the Capitol building, including Statuary Hall and the Rotunda, according to investigators.

More than 800 defendants have been arrested over their alleged actions during the Jan. 6 riot. According to data from the George Washington University Program on Extremism, Dillard is one of more than 100 defendants — or about 12% — with a military background.

Although veterans are represented at proportional levels among the total arrests from the violent breach that day, they make up a far greater percentage of people facing some of the most serious charges.

Related: Veterans Make Up Most of Proud Boys Members Indicted on Sedition for Jan. 6 Violence