Marine Who Rioted in the Capitol on Jan. 6 Gets Probation 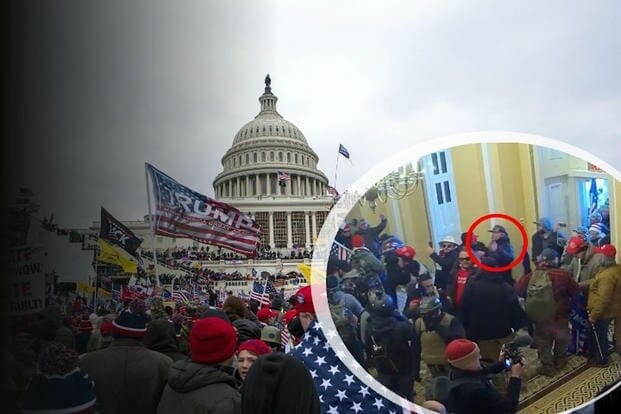 A former Marine charged with disorderly conduct and unlawful entry of the U.S. Capitol on Jan. 6, 2021, was sentenced Thursday to two years’ probation, 60 hours of community service and $500 in restitution after both the prosecution and defense used his prior military service to further their arguments in court.

On Jan.  6, Andrew Cavanaugh, 37, entered the Capitol through the Senate Wing minutes after the initial breach of the building. He remained in the building for just over 30 minutes, excitedly pumping his fist before witnessing law enforcement engaging with rioters and then quickly climbing out of a window, according to court filings.

Cavanaugh pleaded guilty in February to one count of parading, demonstrating, and picketing in exchange for law enforcement cooperation, according to his plea agreement. He does not have any known prior criminal record.

Read Next: Did an Airman Offer a Bribe to Pass Fitness Test? Ramstein Officials Investigating

While his sentencing was short relative to other veterans convicted of crimes in relation to the attack at the Capitol, Cavanaugh’s court proceedings revealed attorneys from both sides of the courtroom drawing attention to his military service.

“Any good defense team will use everything they can to argue for lighter sentencing on behalf of their client, and any good prosecution will do their utmost to protect the general public and ensure that justice is done,” Andrew Mines, an extremism researcher with The George Washington University’s Program on Extremism, told Military.com in reference to Cavanaugh’s case. “At multiple phases of his and other January 6th trials involving defendants with military background, we have seen defense and prosecution teams use military experience to different ends, from opening arguments to the sentencing phase.”

The prosecution argued that Cavanaugh’s experience as a Marine should have prevented him from entering the Capitol grounds at all, where he would have seen a police barrier intact upon his arrival.

Cavanaugh’s last duty assignment as a Marine was as part of an embassy security detachment in Dublin, Ireland, according to his service record.

Court filings said that Cavanaugh watched law enforcement deploy tear gas at the Capitol, knowing “he should not have gone inside.” Two days before, he traveled from Bozeman, Montana, to Washington, D.C., to attend then-President Donald Trump’s “Stop the Steal” rally.

Court records noted he used his military training to treat other rioters for injuries and tried to exit the Capitol “quickly.”

“In this case, Cavanaugh’s former military service makes his conduct on January 6 more egregious and demonstrates a very real need for a sentence that reflects the seriousness of the offense, promotes respect for law, and affords deterrence,” the DOJ document continued. The prosecution requested 30 days in jail.

The defense sought to use his military background as a means to describe his public service.  NBC Correspondent Scott MacFarlane reported that his defense argued he used his military training to deescalate other rioters. Cavanaugh himself expressed remorse in court, saying that the attack changed his life “more than serving in combat” and lamenting the division in the country.

But Mines said that defense counsel’s raising of military service has been typical in Jan. 6 cases.

“We have seen arguments that defendants’ service to their country should be rewarded, whether as warranting dismissal of a defendant’s case entirely, explaining why a defendant felt compelled by a sense of duty to act, or justifying lighter sentencing,” he said. “Defense teams have argued that service to country should not be met with harsh punishment, but rather compassion and respect.”

Cavanaugh, a former infantryman, served in the Marines for eight years with one deployment to Afghanistan and one to Iraq, earning two Combat Action Ribbons, according to his service record. He left the service as a sergeant in 2011.

Veterans groups have previously planned to expel those who participated in the attack at the Capitol from their organizations.

Before handing down the probation sentence, Judge Amit Mehta said that Cavanaugh should have known better than to have entered the Capitol because of his military history, according to NBC, but added that he “laid his life on the line for this country” and was duped by those who claimed the 2020 presidential election was fraudulent.

Cavanaugh, a Montana resident, was identified in part by the hat he was wearing at the Capitol on Jan. 6, according to a statement from a Bozeman-based FBI agent. The hat read “Tactical Citizen,” the name for the company he owns and for which he is a “tactical instructor,” according to a LinkedIn profile that appears to belong to him.

More than 850 people have been arrested for their involvement in the Jan. 6 attack, according to the DOJ. The Pentagon faced pressure to assess extremism among those currently serving, and consider ways to diminish radicalization among veterans, given the number of military-connected rioters involved in the siege compared to their civilian counterparts.

GW’s Program on Extremism estimates that 102 individuals with known military connections, an overwhelming majority of them veterans, have been charged for Jan. 6. That’s about 12% of total rioters federally charged.