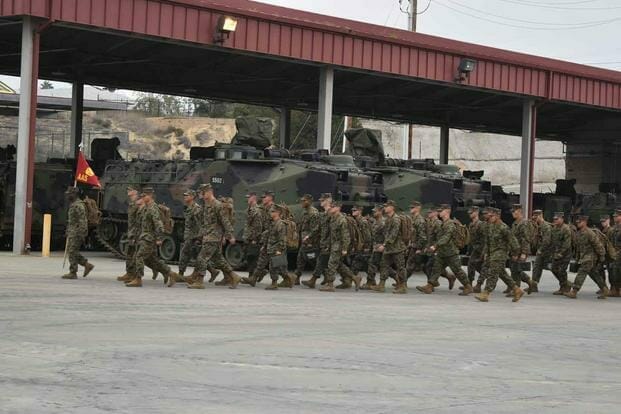 The Marine Corps fired the commander of its Assault Amphibian School on Tuesday as part of its investigation into a mishap with an amphibious combat vehicle that happened in October.

“Sullivan relieved Medeiros due to a loss of trust and confidence in his ability to command after receiving information obtained during the course of the ongoing investigation into an amphibious combat vehicle mishap that occurred during a training event at Camp Pendleton, Calif.,” the statement went on to say.

On Oct. 13, 2022, one of the branch’s new amphibious combat vehicles (ACVs) rolled over in the surf while its crew was conducting training in the waters off Camp Pendleton.

The ACV had three Marines aboard, none of whom were injured. At the time, the service said the vehicle suffered a “mechanical malfunction.”

The Marine Corps has not yet released the results of the investigation into the incident.

However, that was not the first time the ACVs had issues. In winter 2021, they were pulled out of the water for the first time over issues with the towing mechanism. Then, In late July 2022, two ACVs also became disabled in the water off of Camp Pendleton. That incident led to a pause in waterborne operations for the fleet of vehicles, but it was relaxed in September.

The October incident led to another pause of “water operations involving surf zone transit to allow for additional testing and evaluation,” the Marines announced at the time.

The Assault Amphibian School Medeiros commanded is responsible for training “Marines in ACV and assault amphibious vehicle operations and maintenance while assisting in the development of formal training and logistical evaluations on new systems,” the statement said.

The ACV has had a troubled history with the Marines since it was rushed into service early in 2020 to replace the older amphibious assault vehicle (AAV) — a craft that has been in the fleet since the 1970s.

The AAVs were retired after a mishap in 2020 claimed the lives of eight Marines and a Navy corpsman when it flooded and sank off the coast of southern California.

Four subsequent investigations by both the Marine Corps and the Navy found that the incident was “preventable.”