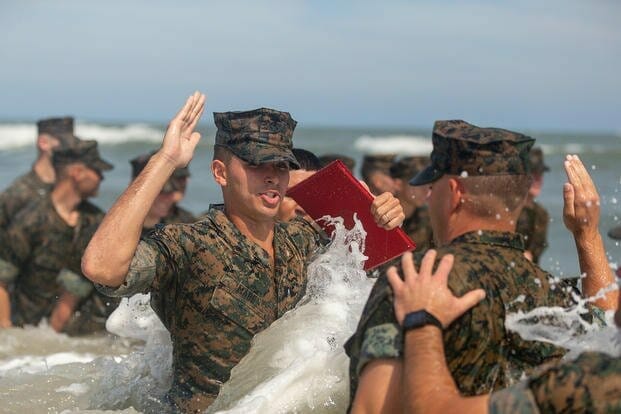 The Marine Corps is celebrating the “tremendous success” of the Commandant’s Retention Program — one of the branch’s latest efforts to not only retain Marines but transform the force into an older, more elite organization.

For the first time in 10 years, the service met its retention goals amid struggles and challenges for all branches to keep and retain troops. The Corps is taking its success as a vindication of its efforts to shift from an “industrial-age manpower model” in which the force was largely made up of young and basically trained troops.

The overall goal of the program — CRP for short — is “to increase the retention of our best Marines,” the Corps said in a statement released last week.The idea behind it is simple: Identify the best Marines in each job specialty based on their evaluations, PT scores and other data available to leaders and then publish that list of selectees.

Those selectees are then able to reenlist through a streamlined process and get preference for their next set of orders. Last week, the Corps said it had 2,468 selectees in the program this year, 1,268 of whom put in reenlistment paperwork.

“Compared to the previous year, only 658 of those same caliber Marines had submitted by this time,” the branch noted in its statement.

Since the rollout of its “Talent Management Plan” last year, Marine leadership has emphasized that it is looking to take the Corps toward an older, more agile and talent-driven force. That turn, and the Corps’ larger vision for its own future, has not come without criticism. A major part of the plan depends on retention, instead of recruitment.

The CRP appears to be playing a meaningful role in that effort. This past year, the Marine Corps had a retention goal of just over 11,000 Marines split fairly evenly between those on their initial contracts and those with four to 20 years of service, Maj. Jordan Cochran, a spokesman for the branch, told Military.com in an email.

With 1,268 CRP Marines having submitted retention paperwork — 707 of whom already reenlisted — it seems the program provided just over 10% of the Corps’ recruits for the year.

Cochran noted that right now the Marine Corps is at “101.14 percent and climbing” in meeting its 2022 goal. “Over the previous nine years, the Marine Corps averaged 97.21 percent of our retention mission,” he added.

Publicly available retention goal figures for the last few years show that the Corps usually aims to keep between 10,000 and 12,000 Marines.

In contrast, the Navy has also been creating incentives for its sailors to stay with the branch, but its programs have included mandatory measures as well, suggesting that the sea service is facing more dire problems. At the end of June, the Navy announced that it was canceling all early discharges while at the same time offering sailors ways to delay separating or retiring.

Additionally, an early version of retention policy changes for the Navy expressly said that COVID-19 vaccination refusers were ineligible for the voluntary extensions of service. However, a later version of the messages removed that language, suggesting that even refusers could request more time in the Navy.

When Military.com reached out to the service about the two versions, a spokeswoman for the branch said the first document was “uploaded in error.”

Although the Marines say that the CRP program has now ended, the Corps’ enlisted assignments team “expects to continue this program in future years.”

“We will continue to collect feedback received from Marines and leaders at all levels to improve the program and the retention process overall for all Marines,” the statement said.