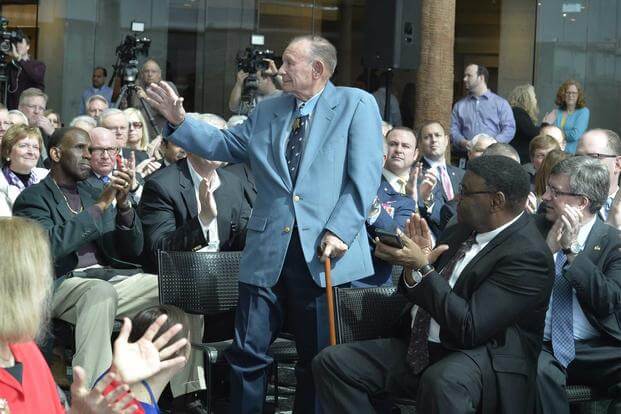 Marine Pfc. Robert E. had just fallen asleep after a night patrol in August 1952 when he was rousted to serve as radioman for a 12-man squad headed to occupy a place called “Outpost Irene” north of Seoul.

He thought it was going to be easy. “I had been to the outpost before and thought of it as a somewhat vacation because no action had ever been there all the time I’d been on that particular part of the line,” Simanek said years later in a Veterans History Project interview for the Library of Congress.

“So, I took an old Reader’s Digest and a can of precious beer in my big back pocket and thought I was really going to have a relaxing situation. It didn’t turn out that way,” he said.

The Chinese attacked. During the ensuing firefight, two grenades landed in the shallow trench where Simanek and other Marines had taken cover while returning fire.

Simanek kicked away one of the grenades, taking shrapnel in his legs from the blast.

Most of that blast hit his right side and leg, but he managed to crawl away to meet a relief column, which took him back to the front lines and a waiting helicopter. “I enjoyed that helicopter ride [to a hospital ship] so much,” he said.

At a White House ceremony on Oct. 23, 1953, Simanek was awarded the Medal of Honor by President Dwight D. Eisenhower for his actions on Aug. 17, 1952, while serving with Company F, 2nd Battalion, 5th Marines, 1st Marine Division.

On Monday, the Congressional Medal of Honor Society announced that Simanek had died in Novi, Michigan, at age 92.

His Medal of Honor citation reads in part: “Determined to save his comrades when a hostile grenade was hurled into their midst, he unhesitatingly threw himself on the deadly missile absorbing the shattering violence of the exploding charge in his body and shielding his fellow Marines from serious injury or death.”

Simanek later told the Detroit News that he was one of four service members who received the Medal of Honor during the White House ceremony, but “I was the only one he [Eisenhower] talked to and all the reporters wanted to know what he said to me.”

“I made something good up,” Simanek recalled, “but the only thing I remember is him looking at me and saying, ‘Why don’t you turn around and look at everyone now.'”

Simanek, originally from Detroit, spent nearly a year recovering from his wounds at military hospitals before being medically discharged from the Marine Corps. He went on to earn a degree at Michigan State University and later worked as an accountant and business manager.

In a tribute to his legacy, then-Navy Secretary Kenneth Braithwaite announced in January 2021 that the next Lewis B. Puller-class expeditionary mobile base ship, scheduled to be launched in 2024, will be named the USS Robert E. Simanek (ESB-7).

His death leaves former Army Cpl. Hiroshi Miyamura and retired Army Col. Ralph Puckett Jr. as the only two surviving Medal of Honor recipients from the Korean War out of the total of 146 who received the nation’s highest award for valor in that conflict.

Puckett went on to serve in Vietnam, where he also was awarded the Distinguished Service Cross. His award from Korea was later upgraded, and he received the Medal of Honor from President Joe Biden at a White House ceremony on May 21, 2021.

Related: How the Story of This Medal of Honor Recipient Wounded 21 Times Was Almost Lost to History