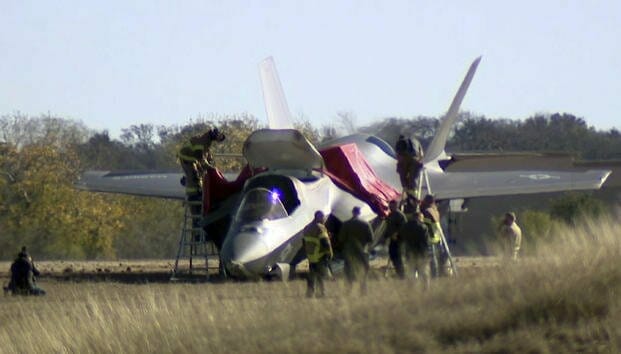 Some models of the F-35 Lightning II are being investigated and grounded by the military services following a crash in Texas earlier this month that forced the pilot to eject from the runway.

The F-35 Joint Program Office, or JPO, told Military.com in an emailed statement Wednesday that one-time inspections have been ordered for certain models “while the investigation into the mishap on December 15 continues” but did not disclose numbers or any other specifics.

“The affected aircraft have been identified,” a statement from the JPO read. “This is a preliminary assessment of the risk, and actions are in work that we believe will lead to a refinement of this assessment in January 2023. The safety of flight crews is the JPO’s primary concern.”

Read Next: The Santa Colonel & the Volunteers Behind NORAD”s Hunt for St. Nick

The recent groundings are roughly two weeks removed from the Dec. 15 incident in which an F-35B Lightning II crashed during a vertical landing at Naval Air Station Joint Reserve Base Fort Worth.

That crash followed a string of incidents and mishaps this year ranging from ejection seat supply issues to a high-profile recovery of an F-35 that crashed in the ocean.

But those incidents will likely not raise a lot of red flags in Congress or the Pentagon, according to Jeremiah Gertler, a senior associate with the Center for Strategic and International Studies think tank in Washington, D.C., who specializes in aviation, told Military.com.

“I think people who are experienced in military aircraft programs, as many Congress members are, will look at that and say, ‘These are the things that typically kind of happen during training and early production,” Gertler said. “We don’t know yet what happened specifically with that F-35B crash. … It’s the difference between a problem with the program and problems with individual airplanes.”

Video footage shared by CBS News’ Dallas-Fort Worth station online shows the F-35B coming in for a vertical landing on the runway; shortly after touching down, the aircraft’s nose cone smashes into the ground. The jet begins to quickly spin around the pavement.

The pilot quickly ejected from the F-35B, according to the footage, with his parachute opening feet before the pilot hit the ground. The jet then came to a stop.

The pilot was an Air Force major who had been doing performance quality checks on behalf of the Defense Contract Management Agency. Shortly after the incident, he was released from the hospital and suffered only minor injuries.

The F-35B “had not been transferred to the U.S. government yet,” according to Pentagon officials, which is typical for aircraft that are still being tested by the manufacturer, in this case Lockheed Martin.

The Marine Corps, Navy and Air Force did not immediately return a request for comment from Military.com asking how many of their F-35s have been grounded following the incident.

The F-35 Lightning II was first cleared for use in 2012. It’s flown by the Marine Corps, Air Force and the Navy and is one of the most advanced aircraft in the Pentagon’s arsenal.

That broad usage, in addition to the continued retirement of other airframes such as the beloved A-10 Thunderbolt, which Congress has begun to accept removing from service after a decade of fights, means the services have no choice but to rely on the F-35, Gertler said.

“What’s plan B?” Gertler told Military.com. “The Marines have no plan B. They have no other airplanes that can do what the F-35 does. In some ways, they’re in the toughest box.”

All the service branches have seen issues or mishaps with their F-35s this year.

Earlier this month, a Marine Corps F-35B’s nose cone was damaged after making a sudden landing in Okinawa, Japan.

An F-35A crashed at Hill Air Force Base in Utah in October, leading the pilot to eject and causing fires to spread on the base.

In late July, Air Combat Command grounded its fleet of F-35As after a recall related to the aircraft’s ejection seats worried officials. By mid-August, the fighter jets were back in the air.

In March, the U.S. Navy announced it had recovered an F-35C Lightning II fighter that crashed into the deck of the aircraft carrier USS Carl Vinson in January before sliding off and plummeting into the South China Sea.

The F-35 program has been notably criticized over the last decade by many in Washington for its high price tag and seemingly endless technical and mechanical issues.

The Department of Defense currently has 450 F-35s, with plans to grow its fleet to about 2,500 in total. But the F-35’s mission-capable rate — the percentage of time that the aircraft can fly and perform at least one mission — declined between Fiscal Year 2020 and FY 2021 due to mechanical issues, according to a report from the Government Accountability Office.

“One major reason is that an increasing number of F-35s have not been able to fly, because they don’t have a working engine,” the GAO report from April 28 said.

But Gertler said Congress, overall, has warmed up to the F-35 program in the past decade, allowing more to be built even over what the Pentagon has requested in annual budgets.

“Congress had been very cautious about the F-35, often withholding money until various performance milestones were met. That all changed about 10 years ago, when Congress started adding unrequested aircraft above what the DoD asked for in their budget process,” Gertler told Military.com. “Individual members still have very differing views, but Congress has consistently supported increases in the F-35 fleet over the last decade. So it seems to be a less controversial program than formerly.”