Record Sentence for Vet Who Assaulted a Cop with Marine Corps Flag on Jan. 6 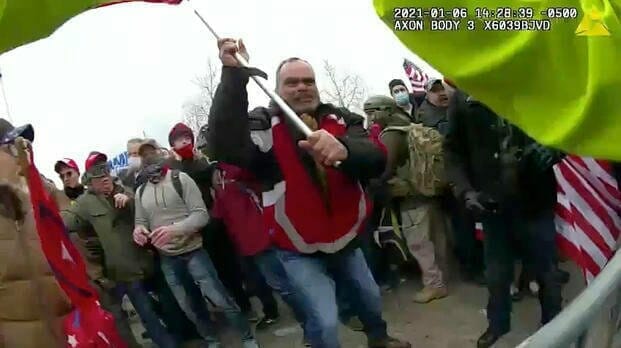 A Marine veteran and retired New York Police Department officer has been sentenced to 10 years in prison over his actions during the riot at the U.S. Capitol on Jan. 6, 2021 — the longest prison sentence handed down for any Jan. 6 defendant to date.

According to courtroom testimony and video footage, when the crowd Webster was in came across police barricades on the grounds of the Capitol, the former Marine and police officer challenged Metropolitan Police Department Officer Noah Rathbun to a fight before breaking through the police barricade and assaulting him with a Marine Corps flagpole he had brought with him. Ultimately, Webster tackled Rathbun to the ground and tried to rip off his gas mask, choking him in the process.

Read Next: Sexual Assaults on Female Troops Reach Highest Level in More Than a Decade

Prosecutors had asked the court for a sentence of more than 17 years “for disgracing a democracy that he once fought honorably to protect and serve,” arguing that Webster showed up in Washington, D.C., “armed and ready for battle.”

“Not only did he pack his NYPD-issued bulletproof vest, but he also packed his ‘off duty’ firearm … [and] his military-issued rucksack containing Meals Ready-to-Eat, water bottles, and Gatorade,” they wrote in a sentencing memo.

Arguing in favor of a lighter sentence, Webster’s lawyers said that, while he did join “a violent mob,” it was “guided by unscrupulous politicians” and that “these forces championed by former President Donald Trump exerted an extraordinary amount of influence over those … at the Capitol on January 6th.”

His lawyers also pointed to Webster’s service in the Marine Corps as a testament to his “good character, peaceful nature and high moral qualities.”

According to records filed with the court, Webster’s service with the Marines was brief and unremarkable. He enlisted with the Marine Corps in 1985 and served for four years as a rifleman before being discharged as a corporal. He deployed twice but earned no personal awards except for a Good Conduct Medal.

His older daughter has also served in the Marines, court documents show.

Webster later served for 25 years as an officer in the New York Police Department where, according to his lawyers, he was once assigned to the mayor’s private security detail.

However, his lawyers admitted that Webster’s actions on the day of the insurrection were “unmistakably violent and reprehensible” and his resume of service “belies the fact that such a person would have known better.”

CNN reported that Judge Amit Mehta, who presided over the case, said that Webster “constructed an alternative truth” in his “utterly fanciful” testimony on the stand in May and added that his claims of self-defense were “just not credible” when sentencing the former Marine on Thursday.

“I still remained shocked every time I see it,” Mehta said, referring to the video of Webster’s assault on Rathbun; he noted several times that the footage completely contradicted Webster’s own testimony of the assault.

Webster was allowed to surrender himself to prison. He has been on house arrest since serving more than four months in federal custody in the early days of his trial. He was also sentenced to three years of supervised release once he serves his prison time.

Related: Prosecutors Ask for 17-Year Sentence for Vet Who Assaulted a Cop with Marine Corps Flag on Jan. 6