Sikhs Sue Marine Corps for Right to Wear Turban, Beards at All Times 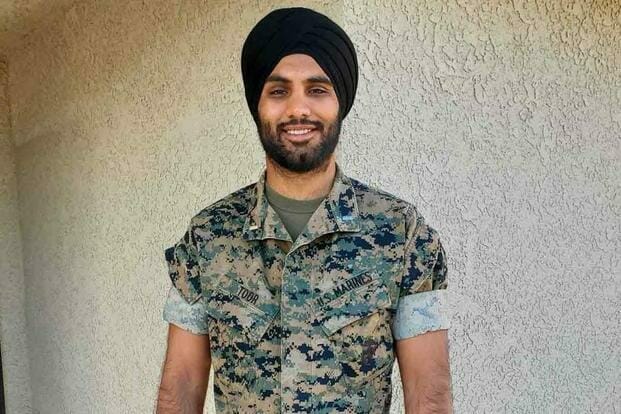 A prominent Sikh Marine officer, as well as several Sikh Marine recruits, filed a federal lawsuit Monday that they hope will get the service to let them serve openly with their turban and beards at all times.

Capt. Sukhbir Singh Toor, one of the four plaintiffs in the lawsuit, has been trying since last year to get the Marine Corps to let him serve while wearing a turban, beard and uncut hair. The service has made some concessions: Last August, Toor was told he could wear his turban and beard but not when deployed and receiving hostile-fire or imminent-danger pay.

Graham West, a spokesman for the Sikh Coalition, an advocacy group for those of the faith, argued that the restriction “constitutes a significant portion of the world — and many essential deployment locations for an artillery officer with Capt Toor’s expertise” in a statement on the lawsuit.

Meanwhile, the three Sikh recruits who are part of the suit “are subject to the same restrictions, with the added limitation that they must sacrifice all of their articles of faith for the duration of their time at boot camp,” West noted.

The lawsuit itself takes the Marine Corps, which has a reputation and history for being one of the least accommodating in the Department of Defense when it comes to grooming standards and overall inclusion, to task over what it argues is an inconsistent application of policy.

“It is perverse to claim that respecting ‘the individual desires of Marines’ to have full-body tattoos … is consistent with the Marine Corps’ image, but that respecting [the four Sikhs’] desires to be faithful to God is somehow antithetical to the idea of cohesiveness and uniformity within the service,” the complaint argues.

The complaint goes on to note that Marine Corps’ action “belies its claims” that the lack of accommodation is over uniformity since the branch recently expanded protection for Marines with pseudofolliculitis barbae, a condition caused by frequent shaving that leads to bumps and scarring and is most common among African Americans, by allowing indefinite shaving waivers.

“These Marines face no limitations going into ‘combat zones,'” the legal filing notes.

“Neither do Marines with beards worn during special operations,” it adds before showing a picture of a Marine Corps special-operations staff sergeant in Afghanistan wearing a full mustache and beard.

Military.com reached out to the Marine Corps for a comment on the lawsuit but was directed to the Justice Department, which did not immediately respond.

The lawsuit pointedly noted that the Army “now has a five-year history of fully accommodating Sikh soldiers” and the Air Force also recently allowed Sikhs to serve without restriction. In April, 2021, a federal judge forced the Navy to let a sailor who is a Hasidic Jew keep his beard while aboard the USS Theodore Roosevelt.

West noted in his statement that “all told, there are now roughly 100 Sikh Soldiers and Airmen serving with religious accommodations — proving that their articles of faith pose no barrier to service.”

Meanwhile, the Marine Corps has a history of being last to accommodate minority groups. Its own history page notes that a presidential order “forced the Corps, despite objections from its leadership, to begin recruiting African American Marines in 1942.” The service was also the last to fully integrate its boot camps for men and women. The first female Marine graduated from Marine Corps boot camp in San Diego less than a year ago – in May 2021.

The Sikh Coalition spokesman explained that the lawsuit comes “after more than a year of attempts to engage the USMC in direct conversation.”

“Our team intends to argue that the USMC must update its policies to be in line with the U.S. Army, U.S. Air Force, and allied forces around the world whose forces already operate with beards,” he said.

The lawsuit also comes amid renewed legal scrutiny of the overall religious accommodation process. Refusers of the COVID-19 vaccine have cited the same law as the Sikhs to argue for their right to be exempt from the mandate. They have met some success in the lower courts, with one judge ordering the Navy to halt the discharge of any refusing sailors.