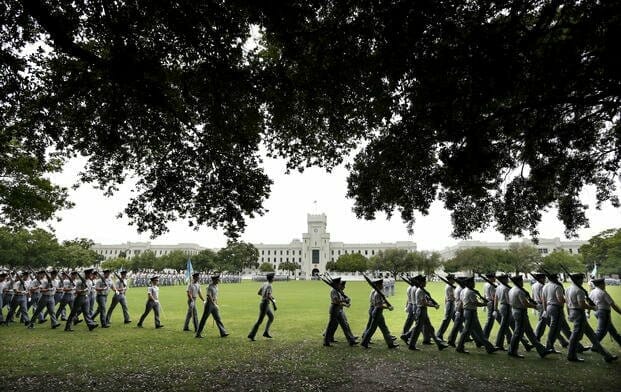 The Citadel has suspended Elias Irizarry, the cadet who pleaded guilty to participating in the Jan. 6 insurrection at the U.S. Capitol.

Irizarry, a Trump supporter who wore a “Make America Great Again” hat during the riot, was suspended following a Commandant’s Board, where he was found to have violated the military academy’s policies for “Conduct Unbecoming a Cadet,” according to a statement released Wednesday by The Citadel.

A suspension requires a cadet or student to leave the college for at least one semester before they are allowed to apply for readmission.

Irizarry, who was a freshman at the time he illegally entered the Capitol with a mob on Jan. 6, 2021, pleaded guilty Oct. 26 to entering and remaining in a restricted area or grounds.

The Citadel’s statement did not say when he was suspended.

“The Citadel will have no further comment on his status at this time,” the statement said.

Irizarry will be sentenced in March. He could receive up to a year in prison but people in similar situations who entered the Capitol but who committed no violent acts typically have received far less time.

The 20-year-old York County native was in the Marine Corps JROTC at Nation Ford High School in Fort Mill before graduating in 2020. He was in the Gastonia, North Carolina, unit of the Civil Air Patrol at the time of the riot.

This summer, federal Judge Tanya Chutkan approved Irizarry to study abroad in Estonia for three weeks as part of a program run through The Citadel after she had originally rejected his request to go abroad but was overruled by a federal appeals court three-judge panel.

In a May 3 hearing on Irizarry’s case, Chutkan told Irizarry that on Jan. 6, 2021, he was part of a “mob (that) almost caused the halt of the transfer of power in this country in what’s tantamount to an attempt to overthrow this government.”

In July, Elliott Bishai, a friend with whom Irizarry traveled to Washington and entered the Capitol on Jan. 6, was sentenced to two weeks in federal prison after pleading guilty to entering a restricted area.

An investigation found that Bishai had dozens of Nazi and white supremacist videos in his cellphone, according to federal prosecutors.

Of the 19 people from South Carolina arrested so far in the Jan. 6 Capitol riot cases, Irizarry is the youngest and the only college student. Of those 19, 11 have now pleaded guilty.

The Jan. 6 insurrection was the most visible of several plots by those around Trump, who has continued to make unfounded claims that the 2020 election was stolen, to overturn the results of the November 2020 election.

A select U.S. House Committee is investigating the attack on the Capitol.

Trump’s own attorney general, Bill Barr, has said an FBI investigation found no fraud that could overturn the election results. Some 60 court challenges also have been rejected by numerous judges for lack of evidence or jurisdiction.

© Copyright 2022 The State. All rights reserved. This material may not be published, broadcast, rewritten or redistributed.