‘The Only Thing I Was Doing Was Taking Care of Troops:’ Medal of Honor Recipient John Canley Dies at 84 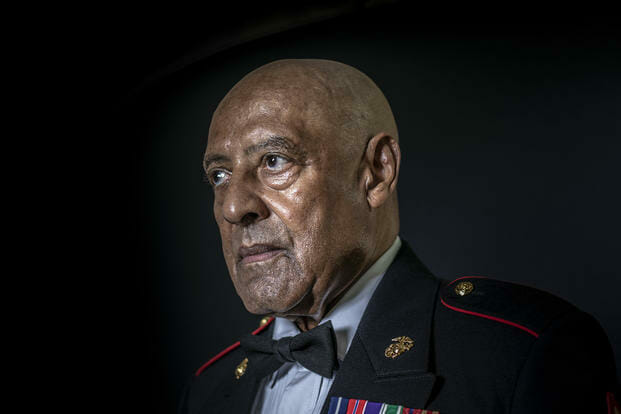 The Marine Corps announced Thursday the death of “Gunny” John L. Canley, a legendary warrior in Vietnam and Medal of Honor recipient who was held in awe by other Marine legends.

The 84-year-old Canley, who retired as a sergeant major in 1981, passed away Wednesday with his family at his bedside in Bend, Oregon, after a decade-long battle with cancer, the Marine Corps said in a press release.

He is survived by several siblings, three children, a stepson and two grandchildren. With his death, there are now 64 living recipients of the nation’s highest award for valor, according to the Congressional Medal of Honor Society.

“The most impressive combat Marine I ever knew,” retired Maj. Gen. Ray Smith, a Marine legend himself who earned the Navy Cross, two Silver Stars, a Bronze Star and three Purple Hearts, said of Canley in a 2018 interview with Military.com.

As a lieutenant, Smith fought alongside Canley in the brutal 1968 Battle of Hue. Those who served with Canley “worshiped the ground the guy walked on,” Smith said. “All through my career, whenever I had to make a decision that would affect Marines, I’d always think, ‘What would Canley tell me to do?'”

Smith spoke after the announcement came down that then-President Donald Trump had signed a bill passed by Congress to waive the five-year limit on recommendations for the Medal of Honor and upgrade Canley’s Navy Cross to the Medal of Honor 50 years after the Battle of Hue.

“This honor is for all of the Marines with whom I served,” Canley said at the time in an interview with Military.com. “The only thing I was doing was taking care of troops best I could. Do that, and everything else takes care of itself. They are an inspiration to me to this day.”

Trump awarded the Medal of Honor to Canley at a White House ceremony on Oct. 17, 2018, citing Canley’s undaunted courage and calm under fire during one of Vietnam’s bloodiest battles.

“John and his company of less than 150 Marines had pushed into the city held by at least 6,000 communist fighters,” Trump said. “In the days that followed, John led his company through the fog and rain and in house-to-house, very vicious, very hard combat.”

Canley was born on Dec. 20, 1937, in Caledonia, Arkansas, and enlisted in the Marines in 1953, despite being underage. “John used his brother’s paperwork to enlist,” Trump said at the White House ceremony.

On his second of three tours in Vietnam, Canley, then a gunnery sergeant, took over as company commander of Alpha Company, 1st Battalion, 1st Marine Regiment, when Capt. Gordon Batcheller was wounded and evacuated during the fight to retake Hue from the North Vietnamese Army and the Viet Cong during the Tet Offensive in late January and February 1968.

In the combat that followed, Canley repeatedly exposed himself to the enemy to draw their fire and reveal their positions to his troops. Twice, he leaped over a wall to pick up wounded Marines and carry them to safety under fire, according to his medal citation.

On taking command of the company, Canley “immediately reorganized his scattered Marines, moving from one group to another to advise and encourage his men. Although sustaining shrapnel wounds during this period, he nonetheless established a base of fire which subsequently allowed the company to break through the enemy strongpoint,” the citation said.

Then on Feb. 4, 1968, “despite fierce enemy resistance,” Canley managed to get into the top floor of a building held by the enemy. He “dropped a large satchel charge into the position, personally accounting for numerous enemy killed, and forcing the others to vacate the building,” according to the citation.

The upgrade of Canley’s Navy Cross to the Medal of Honor was the result of a long lobbying campaign by those who served with him, including former Marine Pfc. John Ligato, a retired FBI agent, along with the advocacy of Rep. Julia Brownley, D-Calif.

In an interview with Military.com and in an article for Leatherneck Magazine, Ligato said the lobbying effort grew out of a 2005 reunion of Alpha Company’s members.

At the reunion, “there were six or seven eyewitnesses to the Gunny carrying wounded Marines to safety, the Gunny confronting enemy automatic weapon positions, and many testimonials of, ‘You saved my ass, Gunny.'”

Sergeant Major of the Marine Corps Troy Black emphasized Canley’s devotion to his troops in the service’s press release. “[Canley’s] first priority was and has always been his Marines — a true example of Semper Fidelis. I’m saddened by the loss of such a great Marine, yet I’m grateful for the legacy he established for generations of warriors,” he said.

That legacy will live on with the scheduled christening June 25 in San Diego of the 784-foot, 90,000-ton USS John L. Canley, a new expeditionary sea-based ship that will be deployed to the Western Pacific.