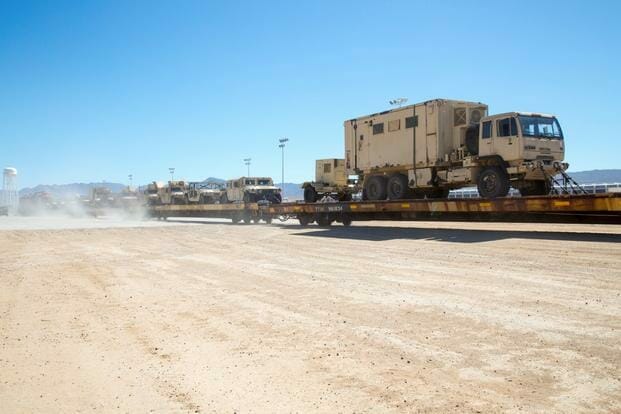 Coastal erosion in Del Mar and a slow-moving landslide in San Clemente threaten the only rail connection to Marine Corps Base Camp Pendleton and Naval Base San Diego, the principal home of the Pacific Fleet.

Military units on the West Coast depend on the strategically important railroad to transport heavy equipment such as tanks, amphibious vehicles and armored personnel carriers, and military supplies, including hazardous materials such as munitions. Without it, that equipment could only be moved by trucks or ships, which would slow responses in an emergency.

That could potentially jeopardize national security, as San Diego’s Marine and Navy bases are the largest on the West Coast and are a jumping-off point to the rest of the world. Naval Base San Diego alone has 54 ships, 20,000 sailors and 6,000 employed civilians. The Navy also has a submarine base, an air station and other installations in San Diego. The Marines, in addition to Camp Pendleton, have their own air station and their West Coast recruit depot that trains over 21,000 enlistees annually.

The rail line’s military significance hasn’t been at the fore as officials scramble to shore up the two bluff-top areas most vulnerable to collapse. Passenger rail service between San Diego and Orange counties has been shut down for repairs in San Clemente since September and could remain suspended for another month or longer.

Freight service continued until late November, when new concerns about the landslide required a suspension for two days until the route was deemed safe. There’s no guarantee there won’t be further closures.

A long-term rail shutdown would have slow, but wide-reaching effects, said Joel Sutherland, supply chain management professor at the University of San Diego and a former executive for CSX Transportation, a 190-year-old East Coast railroad company.

“If you don’t plan for this, then it can be disastrous,” Sutherland said. “We know that corridor is at risk … if it were to close for, say, more than a week, a lot (of freight) can be transferred to trucks.”

However, that is only a short-term solution. The nation’s federal and state highway systems already are overwhelmed by a steady growth in traffic. Also, a limited number of trucks are available.

“Even though (freight) can be moved by trucks, it’s a matter of finding the capacity to do that,” he said. “One trainload can be hundreds of trucks.”

Finding enough trucks to accommodate a train-load of freight would be difficult, Sutherland said.

“They would have to be diverted from someplace else,” Sutherland said. “You can’t just make that many trucks all at once.”

San Diego’s railroad is part of the nationwide Strategic Rail Corridor Network, which consists of 38,800 miles of track serving 193 military installations, including maritime ports such as San Diego where troops leave for overseas deployments. The rail segment from San Diego to Los Angeles and San Luis Obispo on California’s Central Coast, known as the LOSSAN corridor, carries millions of passengers and about $1 billion in commercial freight each year.

“The LOSSAN rail corridor is vital for both economic and military activity throughout the region, including thousands of Marines and sailors at Camp Pendleton who rely on continued rail operations,” said Rep. Mike Levin, D- San Juan Capistrano, in an email Thursday.

Levin helped secure a federal Department of Transportation grant of $11.5 million in 2020 for ongoing efforts to stabilize the eroding bluffs in Del Mar. This year, he passed $9.3 million in federal funding for a San Clemente sand replenishment project that will build up beaches and help secure several miles of tracks along the coast in Orange County.

Still, most people agree that the only long-term solution in places like Del Mar and San Clemente is to reroute the tracks away from the coastline. That solution is certain to cost billions of dollars.

“While the federal funding we’ve gotten so far will help secure the tracks, we are going to need a much more significant federal investment to permanently protect the rail corridor,” Levin said. “Delivering that investment will continue to be one of my top priorities.”

U.S. Transportation Secretary Pete Buttigieg, hosted by Levin, visited San Diego in October and rode the Coaster train over the Del Mar bluffs to learn more about the railroad and the increasing environmental threats. And President Joe Biden, during a stop at Viasat in Carlsbad last month in support of Democratic candidates, said, “We’re going to make sure the second-busiest rail corridor in America, connecting San Diego and Los Angeles, is going to be open and running for a long time.”

Military vehicles from Humvees to 55-ton Abrams tanks commonly move by rail. Many of them are too large and too heavy to travel long distances on the highways, and dozens or hundreds can be carried on a single train.

When the Navy removed the last of the Vietnam-era napalm, about 3.2 million gallons, in the late 1990s from its long-time storage bunkers at the Fallbrook Naval Weapons Station, the flammable petroleum jelly was shipped to Houston for disposal in tanks on flatbed rail cars.

Rail freight transportation by private contractors such as BNSF Railway, which serves San Diego County, is essential to the U.S. military. Because of that, the Defense Department has designated the Strategic Rail Corridor Network to support the movement of heavy and over-sized equipment.

“Military cargo is moving on a daily basis over the Strategic Rail Corridor Network (STRACNET) and other rail lines throughout America,” said David Dorfman, a civilian senior engineer in the Railroads for National Defense Program.

“Military cargo sometimes travels over other rail lines,” Dorfman said in a recent email, but the strategic rail corridor is “a minimal network, so in a corridor with two or more parallel rail lines, only one is designated as STRACNET and military cargo may move over one of the other lines.”

However, in the Los Angeles- San Diego corridor, there is only one rail line, he said.

BNSF delivers rail shipments to Camp Pendleton and San Diego as needed and not on any set schedule, he said. Military traffic volumes can be much higher during times of conflict, but statistics are not readily available.

The Railroads for National Defense Program works with civilian companies and agencies to ensure railroads are ready to support military deployment and peacetime needs, according to GlobalSecurity.org, an independent think tank.

“Rail transportation is extremely important to DOD since the predominance of our heavy and tracked vehicles will deploy by rail to seaports of embarkation,” according to the GlobalSecurity website.

The Strategic Rail Corridor Network dates to World War I, then called the Great War, when the emergency nationwide mobilization of troops resulted in confusion and mismanagement. The federal government stepped in and organized the Railroad Administration, which took over and eventually created the Strategic Rail Corridor Network to ensure the infrastructure could support defense emergencies.

The U.S. Army relies increasingly on commercial rail operators to move material cross-country to maritime ports where troops embark for overseas operations, said Todd Rosenblum, a national security strategist who served in the Department of Homeland Security and as an acting assistant secretary for homeland defense at the Pentagon from 2009 to 2015.

A 2021 assessment of the U.S. military by the Government Accountability Office noted that the Army moves about 67 percent of its equipment by rail from a fort or base of origin to a shipping port during contingencies.

“It makes our nation more productive, mobile and attractive for investment,” he said.

Railroads are by far the most efficient, cost-effective and environmentally friendly way to transport any large or heavy materials, whether military or commercial, Sutherland said.