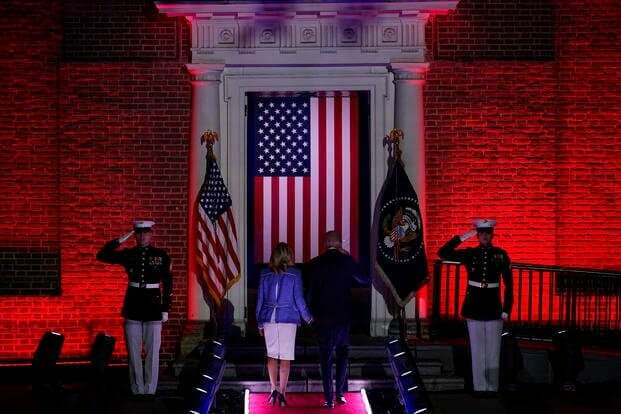 The White House is defending itself from criticism of having two Marines stand behind President Joe Biden during a speech Thursday night in which he castigated “MAGA Republicans,” saying the president was trying to honor the military.

“The presence of the Marines at the speech was intended to demonstrate the deep and abiding respect the president has for these service members, to these ideals and the unique role our independent military plays in defending our democracy no matter which party is in power,” White House Press Secretary Karine Jean-Pierre said at a briefing Friday.

It is not unusual for presidents to surround themselves with the military for a speech, even arguably political ones. Biden’s predecessor, former President Donald Trump, regularly flouted norms meant to protect the military from politics, including placing tanks at the Lincoln Memorial for a major political speech. But Biden came into office specifically vowing to restore those norms and shield service members from politics.

At issue is a speech Biden gave Thursday night outside Independence Hall in Philadelphia, Pennsylvania, that the White House described as being about the “continued battle for the soul of the nation.” Before Biden and first lady Jill Biden came on stage, two Marines walked through a doorway and flanked the entrance. They stayed there, in the frame of television and livestream cameras, for the duration of the speech as Independence Hall was draped in a red light.

“Donald Trump and the MAGA Republicans represent an extremism that threatens the very foundations of our republic,” Biden said in the speech, using the abbreviation of Trump’s “Make America Great Again” campaign slogan.

At the end of the speech, the Marines saluted Biden as he and the first lady walked back inside and then followed them into the building. The Marine Band, also known as “The President’s Own,” was also at the speech but out of frame.

The Marine Corps referred questions on its service members’ presence at the speech to the White House.

Much of the criticism of Biden on Thursday night came from Republicans who said little when Trump used the military as a prop.

“The only thing worse than Biden’s speech trashing his fellow citizens is wrapping himself in our flag and Marines to do it,” tweeted Rep. Darrell Issa, R-Calif., who was nominated for a position in the Trump administration but never confirmed.

Presidents routinely use the military as a backdrop in speeches, but it becomes an issue when those speeches are partisan, said Peter Feaver, a civil-military relations expert at Duke University who was a White House adviser to former President George W. Bush.

“It’s also not something that is a huge scandal or huge crisis,” Feaver told Military.com. “Every president has committed this minor foul on civil-military terms, so in that sense, it’s not a big deal. But it also would have been no problem whatsoever to keep those Marines out of the frame.”

“If the president had been giving a speech about the need to confront global threats or the need to raise the defense budget or a straight national security-related speech, maybe it wouldn’t have been inappropriate to have them there,” Feaver added. “When it becomes partisan, that’s when the military needs to be taken out of the frame.”

Bush, for example, was heavily criticized for his infamous “Mission Accomplished” speech aboard the USS Abraham Lincoln, which had the national security element of declaring an end to major combat operations in Iraq but which critics called a political stunt.

Trump frequently politicized the military throughout his presidency, from using the Pentagon’s Hall of Heroes to sign a ban on travel from Muslim-majority countries in the first week of his tenure to advocating the use of troops to quell racial justice protests in summer 2020.

Military leaders also took heat for stepping into the political maelstrom during the Trump administration, most notably when Chairman of the Joint Chiefs Gen. Mark Milley, while wearing combat fatigues, accompanied Trump on a walk to a photo op after law enforcement violently cleared protesters out of the area in front of the White House in June 2020. Milley later apologized.

The Marine Corps also briefly became embroiled in politics in August 2020 when the Republican National Convention aired a video of a naturalization ceremony at the White House in which two Marines were seen opening the door for Trump. At the time, the Marine Corps brushed off criticism by saying the service members were performing their official duty of “opening doors for the president.”

It’s unclear from video of Biden’s speech whether the Marines there were also doing an official door opening, and neither the Marine Corps nor the White House answered Military.com’s question about whether the Marines were fulfilling that function. Feaver said it would not be unusual for the military to travel with the president to perform a “ceremonial role,” but choosing to leave them in frame after that was a “mistake.”

Biden didn’t mince words when he took office about not politicizing the military.

In addition to saying Biden was trying to respect the military, the White House also pushed back on criticism by arguing his speech was not political and by pointing to other presidents’ use of service members in speeches.

“Standing up for democracy is not political,” Jean-Pierre said. “It is actually normal for presidents from either side of the aisle to give speeches in front of members of the military, including President Ronald Reagan, President George H.W. Bush. It is not an unusual sight or is not an unusual event to have happened.”

Related: The National Guard Is Stuck in the Middle of Political Infighting, and It’s Getting Worse