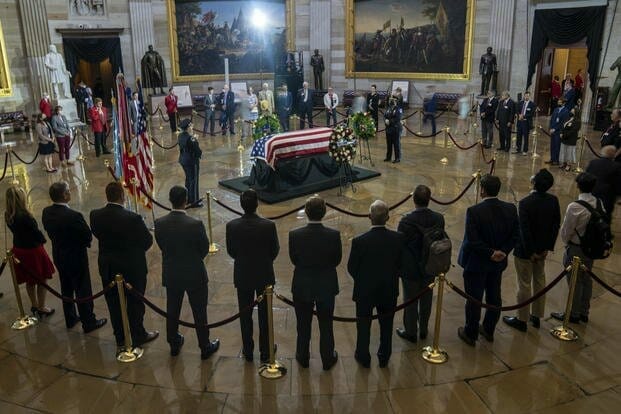 Hershel Woodrow “Woody” Williams stood 5 feet, 6 inches tall, maybe, and the first time he tried to join up in 1942, the recruiter told him he was too short to be a Marine.

Could be that the Army would take him, but Williams, a farm boy from Quiet Dell, West Virginia, thought the Army uniforms were ugly. “I wanted to be in those dress blues” worn by the Marines, Williams said during the course of several interviews with Military.com in recent years.

When they changed the height standards, he signed up for the Marine Corps in the state capital Charleston in May 1943 during the height of World War II. It was the beginning of a lifetime of service including combat, 33 years with what was then the Veterans Administration, and a commitment to Gold Star families through his Woody Williams Foundation.

Read Next: How 2 American Veterans Ended Up in Ukraine, Prisoners of Russian-Armed Militants

On Thursday, the nation paid tribute to his “above and beyond” valor and lifetime of service as his flag-draped casket was set upon a catafalque to “lie in honor” in the U.S. Capitol Rotunda in Washington, D.C. Williams died June 29 at the age of 98 in a Department of Veterans Affairs hospital in Huntington, West Virginia, that was named for him.

Bearers from all the services carried Williams’ casket up the long staircase at the East Front of the Capitol to a ceremony opened by Navy Rear Adm. Margaret Kibben, the House chaplain, who said in her invocation that “esprit de corps ran deep within Woody’s being.”

Paraphrasing the Marine hymn, Kibben said that Williams “never lost his nerve as he fought for right and freedom, his honor clean, his purpose noble.”

After first raising his hand to take the oath, Williams was sent to places they never heard of back on the dairy farm in West Virginia — New Caledonia, Guadalcanal, Guam and then a pork chop-shaped hunk of volcanic rock called Iwo Jima, where he earned the Medal of Honor.

There were 473 recipients of the Medal of Honor from World War II, including 27 from Iwo Jima alone, and Williams was the last surviving one.

Both House Speaker Nancy Pelosi, D-Calif., and Senate Minority Leader Mitch McConnell, R-Ky., said that Williams’ short stature never deterred his contributions to the nation in his service and in the example he set for future generations.

“He was never the tallest Marine, but he was a force of nature” who devoted his life after the war “to helping veterans and Gold Star families,” Pelosi said.

McConnell said the Marine Corps’ “initial skepticism” at Williams’ height gave way to respect and admiration and “did not deter him.” He urged those in attendance to honor a “valiant patriot” who “made giving back a lifelong mission.”

In addition to members of Williams’ extended family, those in attendance included several other recipients of the Medal of Honor, as well as retired Army general and now Defense Secretary Lloyd Austin; Army Gen. Mark Milley, chairman of the Joint Chiefs of Staff; and Gen. David Berger, the Marine commandant.

The ceremony had special resonance for Milley, whose late father, Alexander Milley, served as a Navy corpsman during the Battle of Iwo Jima.

The ceremony at the Capitol was followed by a wreath laying by members of the Williams family at the base of the West Virginia panel at the World War II Memorial on the National Mall. Plans for Williams’ funeral and burial in West Virginia were not yet complete.

Flamethrower to the Front

On Feb. 23, 1945, Williams, then a corporal, was with the 1st Battalion, 21st Marine Regiment, when its advance across an airfield was stopped by interlocking fire from a series of reinforced concrete pillboxes held by the Japanese defenders.

Williams took cover in a shell hole where officers tried to figure out what to do next. Could Williams do something about those pillboxes? “I’ll try,” he said.

With covering fire from four Marine riflemen, and a 70-pound M2 flamethrower strapped to his back, he crawled forward with a determination to get at the pillboxes.

His Medal of Honor citation read that “he fought desperately for four hours under terrific enemy small-arms fire and repeatedly returned to his own lines to prepare demolition charges and obtain serviced flamethrowers, struggling back, frequently to the rear of hostile emplacements, to wipe out one position after another.”

As a Marine legend in later life, Williams was a frequent guest at Marine Corps special events; one of his last appearances was in June 2021 at Marine Corps Recruit Depot Parris Island in South Carolina, where he donned dress blues, the Medal of Honor draped round his neck, as an honorary official for the graduation parade of new recruits.

As the 350 graduates passed in review, Williams had his eye out for a strapping kid among them named Cedar Ross — his great-grandson. Williams was especially proud when told that Ross’ exemplary performance during training had earned him a meritorious promotion to private first class at graduation.

With Williams at his side, Ross later told CBS News that the drill instructors found out about halfway through training that his great-grandfather was Woody Williams. “The chief drill instructor told me, ‘Ross, you’re going to have big shoes to fill,'” and he responded “Yes, sir. Thankfully, I wear size 15.”

Williams said of his great-grandson, “The only advice I think I gave him was to do the very best that he could and then to do a little more.”