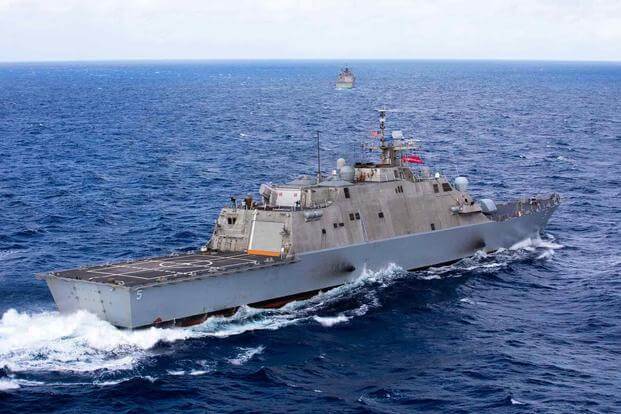 The Navy has provided new details about the fire that broke out last week aboard the USS Milwaukee, a littoral combat ship based at Naval Station Mayport near Jacksonville, Florida, suggesting the damage was minor. But assessments are ongoing.

“At this time it appears that the damage was limited to a single stateroom,” Navy spokesman Lt. Anthony Junco told Military.com in an email Monday.

Junco said that 13 people were “evaluated for possible smoke inhalation issues,” but none required hospitalization.

Read Next: Marine Vet Who Was Allegedly Part of Neo-Nazi Group That Called for Mass Murder Arrested on Gun Charges

On Friday, the Navy confirmed that an electrical fire had broken out on the ship shortly before 2 p.m. Reports initially appeared on social media but were confirmed by local fire department and Navy officials.

Junco explained that the Navy is still “assessing the full extent of the damage … and the potential costs that may be required if repairs are necessary.”

Sailors from the Milwaukee were the first to respond to the fire, but Junco confirmed reports that nearby ships also sent crew members to help.

This is the second event that has thrust the littoral combat ship into the news recently. From late December 2021 through early January 2022, the ship battled an outbreak of COVID-19 while it was on a deployment to South America. The outbreak forced the ship to stay at Guantanamo Bay, Cuba, as about one-quarter of the crew came down with the disease. The ship was underway less than two weeks later, and the incident appeared to be an indicator of how quickly the Navy could weather a COVID-19 outbreak among a fully vaccinated crew.

The Milwaukee returned from that deployment in April 2022. In May, the ship participated in New York’s Fleet Week.

Fires aboard ships — even those in port — are dangerous and can often spiral out of control, as recently evidenced by the USS Bonhomme Richard.

The amphibious assault ship saw a fire break out in its lower cargo hold on the morning of July 12, 2020. The blaze burned for four days, sometimes topping 1,200 degrees. Although it was eventually put out, the Navy decided the ship would be too costly to repair, and it was decommissioned. The service alleges the fire was set by a young, disgruntled sailor, though he has yet to face trial on those charges.

That wasn’t the first time the Navy has had to scrap a ship after a port fire. The USS Miami, an attack submarine, had a fire break out while it was in the Portsmouth Naval Shipyard in 2012. A later investigation determined that the fire was deliberately set by a shipyard employee. Repair costs for that fire also ultimately led to the vessel being decommissioned instead of repaired.

Unlike those two notable examples, there has been no indication that the Milwaukee’s fire was deliberately set, according to the Navy.

Related: At Least 9 Helicopters Damaged, Blown Over in Norfolk Storm